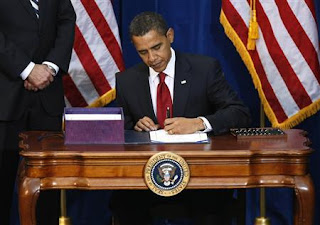 TransGriot Note: From Ashley Love about a DC event for President Obama

President Barack Obama has done more for lesbian, gay, bisexual, transsexual, transgender and intersex Americans in the first year alone of his presidency than any other president. Many LGBTI African Americans and allies are disappointed by LGBT Inc’s personal attacks on a fierce advocate such as our president because change has to be inspired, not forced. To show our solidarity and support of our first African American Preside...nt, we need to come forward and be vocal about the real changes that have taken place.

This weekend has been a historic event with the first convergence of over 100 African-American LGBTI leaders from around the country at the Congressional Black Caucus with the National Black Justice Coalition's OUT on the Hill event! In that spirit, I am asking that we come and celebrate together at Busboy's & Poets, a venue located in a historical neighborhood where Black intellectuals, artists and activists have come together for over a century to take a stand for social justice and to combat racism.

TransGriot Update: Speakers for tonight's event are MAGNET organizer Ashley Love and IFGE Executive Director Denise LeClair. There will be a special message from Kylar Broadus, Board member of the National Black Justice Coalition.
Posted by Monica Roberts at 3:15 PM