Moni's Thoughts On 'For Colored Girls' 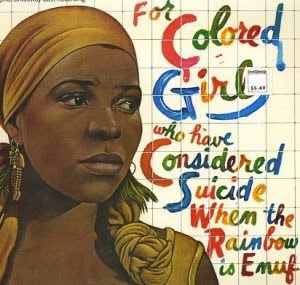 Like other peeps in the Afrosphere, I have my love-hate moments with Tyler Perry, Madea and his films at times.

But I have to grudgingly admit that many of them are in my personal DVD collection. When I need a good laugh, I pop the microwave movie butter popcorn, fire up the DVD player and watch them on a regular basis along with the other Black cinema classics such as Carmen Jones, Shaft, Cabin In The Sky and Imitation of Life that are in my movie collection.

So I was surprised to find out he was directing and producing the screen version of Ntozake Shange's classic play For Colored Girls Who Have Considered Suicide When The Rainbow Is Enuf considering all the Black female directors such as Gina Prince-Bythewood, Julie Dash, and Kasi Lemmons, or screenwriters such as Suzan Lori Parks that I believe would have done a better job with this play than Perry.

Well, he was the one tapped by the studios to do it and the trailer has been released for the movie. For Colored Girls debut has been moved up to a November 5 release date so it can get Oscar consideration.

Okay people, now that you've seen the trailer, are you headed to the theater to support it?

I am, and hear me out on this.

One of the things I and many of my friends gripe about is the lack of quality Black movies to attend. The last quality ones I have gone to the theater and paid hard earned dollars to see were Precious and The Secret Life Of Bees, and I have yet to attend a movie since I moved back to Houston.

Come to think of it, the last movie I watched inside the Houston city limits was Two Can Play That Game.

Hey, don't trip. I like Vivica A. Fox, Morris Chestnut and Anthony Anderson. 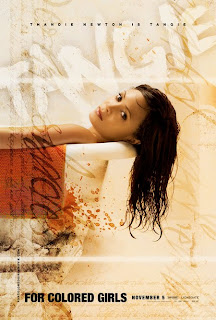 Now, we know that Hollywood's idea of a quality Black movie is to put stuff like 'Lottery Ticket and other nouveau coonery on the screen when there are reams of novels by Black authors such as Eric Jerome Dickey, the late E. Lynn Harris, the late Bebe Moore Campbell, romance queen Kayla Perrin and others that just beg for and could easily be converted to feature length films.

But in order for those books to be turned into feature films, we probably need to support For Colored Girls with that larger goal in mind.

Yeah, I know the idea of putting your cash in Tyler Perry's pockets makes some of you nauseous. But it's also putting money in Ntozake Shange's pocket as well as the actors who are in this film.

You have to give him props for the cast he assembled for this film. H-town is represented in Tony award winning actress Phylicia Rashad and our homegirl Loretta Devine. There's two other Tony award winners in Anika Noni Rose and Oscar winner Whoopi Goldberg. 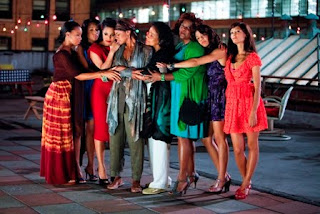 Some of my fave actresses are in this film such as Kerry Washington, Thandie Newton, Janet Jackson, Kimberly Elise and even Macy Gray has a role.

So yeah, I'll definitely be at my local multiplex checking out For Colored Girls and I hope you will focus more on the people in the movie rather than the person producing it.

If it turns out to be a slamming movie, I'll definitely give Tyler his props for it.

But let's focus on the big picture, pardon the pun. If you wish to see more quality Black films coming from Hollywood, you have to send that message with your box office dollars before Hollywood hears it.
Posted by Monica Roberts at 1:01 PM