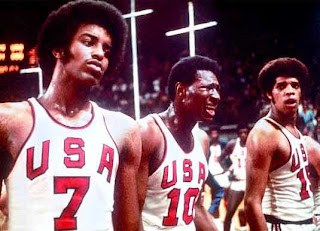 Thirty eight years ago today I was watching on TV as Team USA was screwed out of a basketball gold medal in the 1972 Olympic Games in Munich.

They played the Soviet Union for the gold on that day that lives in American basketball infamy. With Team USA clinging to a 50-49 lead, they stopped the Big Red Machine twice in the final three seconds of the game to seal the apparent gold medal clinching victory.

Incredibly, the Soviets were given a third chance when R. William Jones, Secretary General of FIBA, stepped in and ordered the clock again reset to :03 and the game replayed from that point. This time the Soviets made it count. Aleksander Belov and the USA's Kevin Joyce and Jim Forbes went up for the pass, Belov caught the long pass from Ivan Edeshko at the foul line sending the two Americans sprawling, Belov then drove to the basket for the layup and the winning points.

The controversial 51-50 loss snapped Team USA's 63 win Olympic basketball winning streak. The US filed a post game protest which was denied by FIBA officials. The incensed American players voted unanimously to refuse their silver medals and to this day not one player has picked them up.

Team USA and the Russians have clashed on international basketball courts more than a few times since 1972. Our last FIBA title in 1994 was won at Russian expense in Toronto. But the Russians denied us a chance to repeat as FIBA champs despite the NBA lockout when they knocked Team USA off 66-64 in the 1998 FIBA semis

I bring it up because one of the players for Team USA in that 1972 game, Mike Bantom, is now the NBA's senior vice president of player development and accompanying the team in Turkey.

In addition, there was some pregame trash talking that opened up those old basketball wounds.

Russia's American born coach David Blatt stated that he believed the outcome of the 1972 game was fair.

Coach K shot back, of course, Blatt would have that opinion as a Russian.

During the first quarter, it looked like history was eerily repeating itself as the first quarter ended tied at 25 apiece. The Russians sprinted out to a five point lead during the second quarter before Team USA tightened the defensive screws and started forcing turnovers. 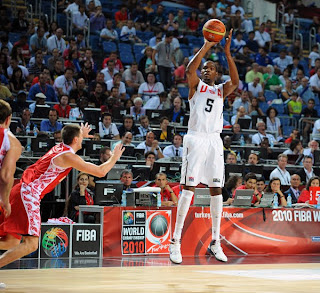 Kevin Durant ensured that there would be no repeat of 1972 as he torched the Russians for 33 points as Team USA broke the game open in the third quarter to cruise to the win and get one step closer to bringing the Naismith Trophy back to the USA.

They will play Lithuania, who knocked off the FIBA number one ranked Argentine squad 104-85. The other semifinal features the hosts Turks and Serbia.

I want the Serbs to get their butts kicked because I'm tired of their fans posting on FIBA sites the BS lie that Team USA's players are on steroids or crowing about the alleged superiority of European basketball. 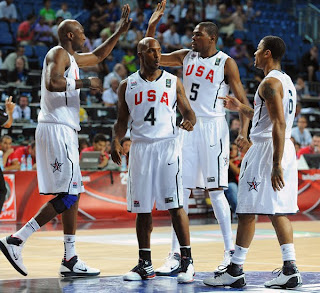 Yeah, right. NBA ballers are faster and better than the slow plodding Euroball players you're used to watching.

If Euroball is so superior, why are some of your players warming the ends of NBA benches? When I called the Serbian fans on their ignorance and crap, (the NBA is part of the FIBA Clean Game anti doping program) I found myself one day mysteriously blocked from posting on the site until I complained about it.

Then again, it would be more fun if we beat the Serbs down in the finals.
Posted by Monica Roberts at 5:30 PM