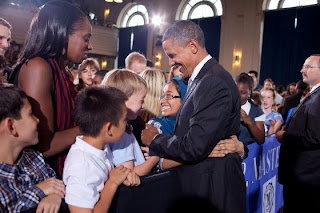 Just like last year, the racist Republicans have intimidated or bamboozled many school districts into not broadcasting President Obama's back to school speech.

Here's the speech that conservafools and their sheeple didn't want kids to hear.

In another interesting note, Jim Greer, the former Florida GOP head who is facing corruption charges, charged his party with racism in a statement to the Miami Herald.

"In the year since I issued a prepared statement regarding President Obama speaking to the nation's schoolchildren, I have learned a great deal about the party I so deeply loved and served."

"Unfortunately, I found that many within the GOP have racist views and I apologize to the President for my opposition to his speech last year and my efforts to placate the extremists who dominate our party today. My children and I look forward to the president's speech."
Posted by Monica Roberts at 3:00 AM