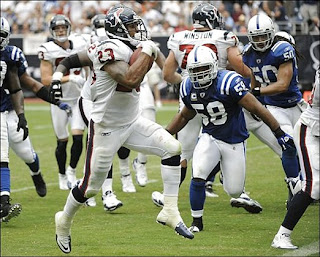 Even though the Texans proclaimed all throughout training camp that they were ready to take the next step, challenge for the AFC South title and make the NFL playoffs, there was still much nervous energy amongst Texans fans as they opened the 2010 NFL season in Reliant Stadium against the team that has owned them since 2002, the Indianapolis Colts.

Before Sunday's tilt the Texans had a 1-15 record against the seven time AFC South champs. The lone win in the series occurred in the same season the Colts won the Super Bowl. If the Texans were going to make their playoff dreams become a reality they had to find a way to beat the Colts at least once in division play.

Sunday the Texans unveiled a power running attack that ran over, around and through the undersized Colts defense. Arian Foster set a Texan club record with 231 yards rushing and scored three touchdowns in the 34-24 victory. 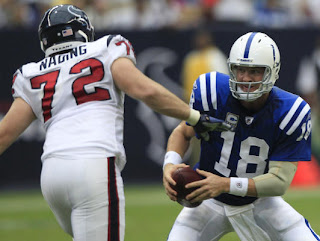 It was the second highest rushing total in NFL history by a running back on the opening weekend since OJ Simpson's 250 yard romp in 1973 against the New England Patriots enroute to his 2003 yard season.

They also did something to Peyton Manning that he hadn't experienced in previous business trips to Reliant Stadium to play my local NFL franchise. He felt the heat from a relentless pass rush from Mario Williams and an aggressive Texan defense.

Okay Texans, now that you've beaten the Colts, can we beat 'em again along with sweeping the Tennessee Traitors?

The Texans schedule doesn't get any easier as they travel to Washington DC to face Donovan McNabb and the Redskins before we renew the hatefest in Week 3 with the Arlington Cowchips.
Posted by Monica Roberts at 6:00 PM