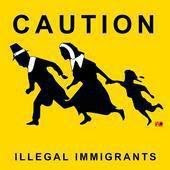 There are times when you just see various graphics around the Net at various blogs and there's so much truth to them you just have to save 'em and show them to your own group of readers.

This one mimics the signs posted along I-5 in the San Diego area.


Lost in all this rush to pass Juan Crow laws by the 'scurred' white GOP folks who are railing about immigration because they are rapidly becoming a minority in America,  is the fact that when you break it down historically, they and everybody else who used boats to get to North America except Native Americans are the original illegal aliens..

Posted by Monica Roberts at 4:30 AM