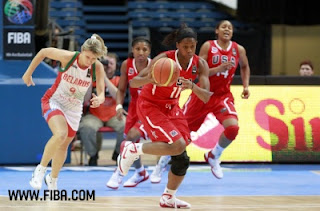 Team USA has had a maddening tendency in this 2010 FIBA Worlds tournament of getting off to slow shooting game starts, then kicking it into high gear and burying their opponents with waves of superior athletes coming off the bench

They flipped that script in today's Group E matchup with Belarus.

Team USA was wide awake and on fire from the opening tipoff.  They shot a blistering 68.3% for the game and 55.6% from three point range as they rolled over Belarus 107-61.   Once again 11 out of the twelve Team USA lady ballers scored with five USA players in double figures.

Team USA jumped out to a 37-11 opening quarter thanks to a 17-0 run triggered by back to back Candace Dupree buckets and a trey from Diana Taurasi.   The lead grew to a 30 point 58-28 bulge by halftime. 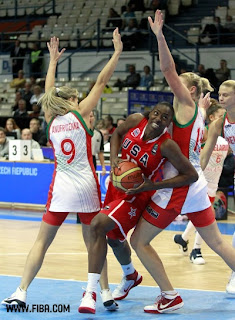 The double figure club members for this beatdown were led by Sylvia Fowles 15 points and six rebounds.   Diana Taurasi scored 14 points in just 15 minutes of work,  Candice Dupree with 12 points, and Swin Cash and Maya Moore tossing in 11 points each.   Angel McCoughtry and Lindsay Whalen both had 9 points as they moved to 5-0 in Group play and clinched a spot in the quarterfinals.

Playtime is over for 5-0 Team USA.  They have a showdown with 5-0 Australia tomorrow to see who will emerge as the winner of Group E and take the top seed.

You can bet this probably won't be the last confrontation between the FIBA women's basketball superpowers unless one or both get upset in the quarters.