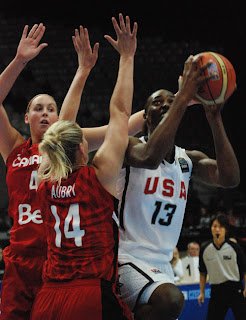 Top four teams in Groups E and F move on to the knockout rounds starting October 1 in Karlovy Vary.

Our first game in Group E play today was against our northern neighbors.  The last time they beat us in FIBA play was a 74-68 win in 1975.

They didn't bring their attack beavers with them to the Czech Republic as they got trounced by the FIBA number one ranked USA women 87-46.

The Canadians hung with us, built a six point lead and were only trailing 19-14 at the end of the first quarter thanks to another one of those patented slow starts that have been plaguing this team during this 2010 FIBA worlds.  Team USA tightened up the defense and unleashed a monster 28-11 second quarter on Canada to take control of the game.   A 40-21 second half allowed Team USA to cruise to victory. 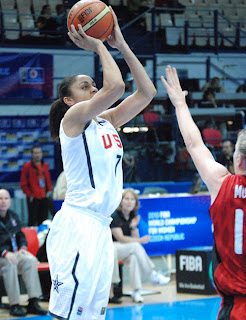 Team USA forced 32 turnovers and collected 20 steals that they converted into 38 second chance points and 31 points off of fast break opportunities.

"I thought tonight was a great defensive effort," Maya Moore said. "It was really obvious that it was our defense that sparked our offense. I think we had at least five and-ones; that just shows you that we are making improvements, and we are more focused. So, I think it was a step forward tonight."

Next up for the 4-0 American ballers is Belarus before our first showdown with defending  FIBA world champion Australia on Wednesday.

There is one thing we Team USA fans would love to see from our FIBA Number one ranked team.