If Semenya Looked This, Y'all Wouldn't Be Hatin'

She entered the 800m at a July 26, 1983 meet in Munich, Germany as a training exercise and the rest is history. Her time of 1:53.28 in that race not only smashed the then world record of 1:53.43 held by Russia's Nadezhda Olisarenko, it is currently the oldest world athletics record on the books.

One of the things that has pissed me off in this whole Caster Semenya saga since it started last year is the undercurrent of bigotry and the denigration of her femininity by the vanilla flavored peanut gallery.

Some of the haters throwing 'that's a man' shade at Semenya within the 800m world damned sure wouldn't be on the modeling catwalks themselves or on the stage competing for their nations in the Miss Universe pageant.

But let's get to the crux of what I suspect is some of the motivation behind the hatin' on this talented 19 year old South African runner. 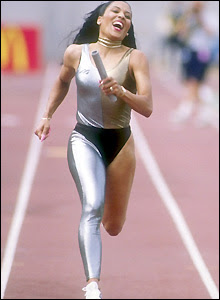 They have also etched their names into the sports record books. The next oldest world record held by a woman is Flo-Jo's blistering 10.49 100m time she set in Indianapolis during the US Olympic trials in 1988,

In the long distance races such as the 3000m steeplechase, 5000m, 10,000m and the marathon, those are increasingly either being dominated by eastern African runners and Asian runners or the European dominance of them is being challenged.

Now that challenge to European dominance is happening in the middle distance races such as the 800m and 1500m. 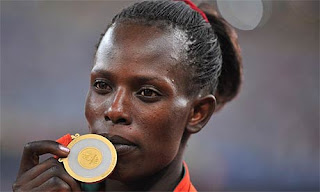 During the 2008 Beijing Olympics the medals in that race were all won by runners from African nations, with Pamela Jelimo of Kenya taking the gold.

Want to guess who was the person Semenya passed in August 2009 to become the fifth fastest 800m runner of all time? 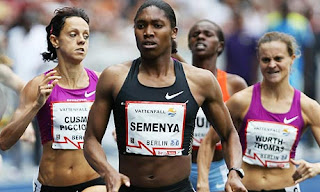 Now a young runner from South Africa comes along seemingly out of nowhere like Pamela Jelimo did in 2008 to win the 2009 world championship in the event. Factor in that Semenya has three years to improve on that time, she's of African descent and has non standard feminine presentation, and let the 'unwoman' hate flow.

But peep another picture of Kratochvilova from back in the day. Sure didn't hear much 'that's a man' shade coming from the vanilla flavored peanut gallery at the time. 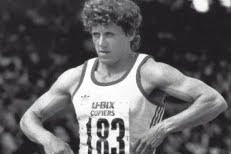 No clamor to have Kratochvilova immediately slapped in stirrups and subjected to a humiliating and invasive 'gender verification' examination. No enduring an 11 month competition ban as your competitors gleefully denigrated your gender presentation in front of rolling television cameras.

It's why I'm hoping that Semenya not only breaks that 800m world record, it would be even sweeter if she did so while snatching the gold medal in London two years from now.

Posted by Monica Roberts at 2:01 AM

Even more amazing given that we now know, courtesy of post-cold war opening of records that Soviet and East German female athletes were given massive doses of steroids.

Except for maybe gymnasts or figure skaters for whom muscle mass would have been a net negative, it would be hard to find any Soviet-era female Olympic athlete who was not built as much in a laboratory as in a weight room.