If you haven't heard of Jowelle De Souza, it's past time that you got to know this remarkable lady.   She's a businesswoman who owns a beauty shop in San Fernando that Trinis flock to in addition to being a civil rights warrior and animal rights activist in Trinidad and Tobago.

De Souza also became the first trans person to sue the Trinidadian state for a violation of her constitutional rights.

The story begins in March 1997.   A photographer that knew about her trans past was taking pictures of her without her permission and got overly invasive of Jowelle's personal space.   When she pushed him away, she was arrested by the police and charged with assault.

She was taken to a nearby police station by Officer Eric George and taunted for hours about her sexuality.  Despite her appearance and identification clearly pointing in the female gender direction, the male po-po's were intent on strip searching her.  The only thing that stopped the boys from doing so was the intervention of a female officer.

De Souza later stated about it, "There was no legal right to search," she said. "I pushed (the photographer). I didn't assault him with a deadly weapon."

She was eventually released from custody without having to endure a humiliating strip search, but it was on like Donkey Kong.  Most TBLG people in the Caribbean fear police reprisals if they press charges, but not De Souza.    She sought legal representation and ended up getting as her attorney one of Trinidad's most prominent lawyers, Lynette Maharaj, the wife of the then attorney general of Trinidad.   .


In May 2001 she won her unlawful arrest and harassment case when Eric George, one of the accused officers in the case killed himself and his wife before the case went to trial.   She was awarded a $30,000 cash settlement that she donated to charity. 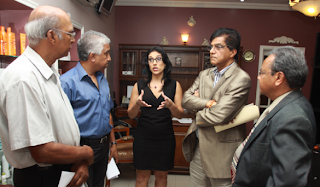 Since then she has continued her activism on a variety of fronts, been outspoken on civil rights issues, and is considering running for political office in Trinidad and Tobago.

She said in a 2002 interview, “I want to get into that arena and do more for people who are different. I am prepared to take on that. I want to make our presence felt. I have reached where I want to reach now. I want to help other people.”

She is a role model and an inspiration for other transpeople in not only Trinidad, but the entire Caribbean  region.