Close Your Eyes And Hold Me 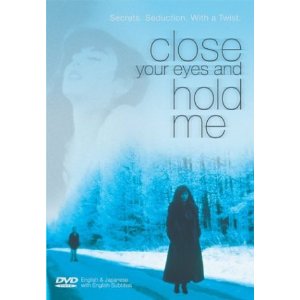 I recently stumbled across a movie that I'm planning to add to my DVD collection that was called Japan's The Crying Game.   It was also a 1997 selection of the Palms Springs International Film Festival

It's the 1996 Itsimuchi Isomura film entitled Me Wo Tojite Daite in Japanese.   It's known as Close Your Eyes And Hold Me in English and stars Kumiko Takeda, Kazuya Takahashi and Natsue Yoshimura.

The movie focuses on office worker Amane who has a good job and a steady girlfriend in Juri.   His predictably pedestrian work and personal life is turned upside down by accidentally running over a beautiful but mysterious stranger while fumbling around reaching for his cell phone while driving  .

Amane is remorseful and apologetic about the accident as he vists her in the hospital.  He takes responsibility for her injuries and promises to do anything for her, but she refuses compensation and disappears.

Concerned about how she's doing, he becomes obsessed with the beautiful stranger and tracks Hanabusa down to the night club where she works as a hostess.   Amane enters and is surprised to discover it's a night club in which the elegant and graceful hostesses working there are all trans women.   He sees her on stage singing, and curiosity about Hanabusa leads to conversation and a triangular relationship that will eventually involve Juri and impact all their lives.

If you're at work, may want to wait until you get home before you run that trailer

Let's just say the movie gets interesting   Script was obviously written by a cis person, because no trans woman no matter what her genital configuration refers to herself as a man.   Hanabusa is played by survey says, cis woman Kumiko Takeda, who lets be real, does have it going on in the beauty department.

Unlike you Satoshi Kanazawa, I give credit where credit is due when it comes to beautiful women.

But back to the post.   For the most part, Close Your Eyes And Hold Me lived up to its rep as the Far East version of The Crying Game.