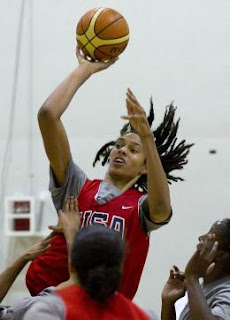 As you TransGriot readers are aware of, I'm a big hoops fan, especially on the women's side.

I've been following the career of my hometown lady baller Brittney Griner ever since one of my readers told me about the viral YouTube videos of her dunking on her high school competition enroute to taking Aldine Nimitz to the Class 5A state finals a few years ago.

The evolution of Brittney continues as she along with Gonzaga point guard Courtney Vandersloot were invited to attend a recent three day training camp for the USA national squad in Las Vegas as the road to determining who will make up the 12 woman squad in London next summer starts .

She was the only collegiate player there in Vegas and bad news rest of FIBA basketball world, she is in the mix to be on either next summer's or a future final twelve woman USA Olympic b-ball squad or a USA FIBA championship team. .

And yes, despite the rough first day of camp,  the current national squad players and coaches were excited about the prospects of Brittney's 2.08 meter frame (6' 8" inches for the metrically challenged) blocking shots and patrolling the lane for us either at the London Olympics or the 2014 FIBA world championship in Turkey 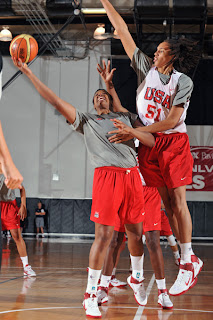 "Brittney made tremendous progress in the three days she was here," said USA coach Geno Auriemma. "The first day she was completely lost and out of it. The second day she looked like a completely different person. Each time she's together with us you'll see her get better and better and better. Her size, her length are impact things."

"She does a spin move from the free-throw line, takes one dribble and slams it with two hands," coach Jennifer Gillom said. "’I said, I’m done.’ she got my respect right away. Wow, that was amazing. I’ve never experienced anything like that with any player. That was quite impressive. This kid has a future, an unbelievable future. To think what she could become is amazing. I’m telling you, this kid is something special, very special."

And it's going to be fun watching her play..