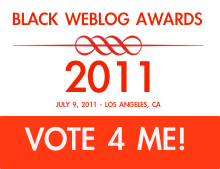 After a nerve wracking week of wondering if I made it,  I'm pleased to report that for the second straight year TransGriot has been nominated in the Best LGBT Blog category for the 2011 Black Weblog Awards!

My esteemed competition for this year's Best LGBT Blog award is Pam's House Blend, the Skorpion Show, Southern 4 Life and Son of Baldwin

The voting commenced yesterday  and will run through June 17.    The winners in the various Black Weblog Awards categories will be announced in the first ever Live Awards Gala at the Blogging While Brown Conference in Los Angeles on July 9.

But whether I win this award for the second straight year is in your hands, so vote early and often until June 17.