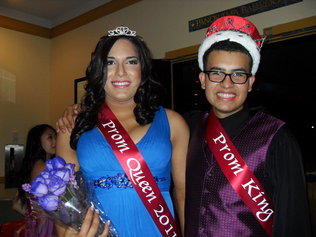 I posted a story back in 2007 about Fresno trans teen Crystal Vera becoming the first trans prom queen.

In light of the drama that Andy Moreno went through in trying to become homecoming queen at North Dallas High, was happy to hear about what just transpired (pardon the pun) at McFatter Technical High School in Davie, FL.

17 year old Andii Viveros beat out 14 candidates to  become the second trans teen nationally to become the prom queen at her school.  To make it even more interesting, the prom king is 17 year old gay male student Juan Macias.


Andi is two years into her transition, and at times it has been rough for her despite the support from her family.  She had to deal with bullying and taunting behavior from students along with a less than supportive administration until this year.   She also had to deal with a faction of students who started a petition to get her removed from the ballot.

Andii told the Miami Herald in an interview this year the school got a new principal who was supportive of her.  She even encouraged Andii to run for prom queen.

Andii is planning to attend Broward College in the fall and get a degree in culinary arts management.

Congrats sis, and best of luck in your future endeavors.