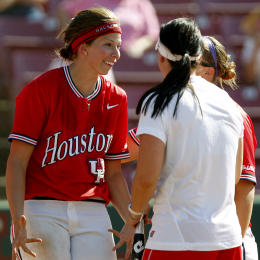 The UH softball program has only been in existence for 11 years, but is on the verge of a breakthrough season in terms of becoming a nationally recognized program.   They played a tough non-conference schedule this year and compiled a 22 RPI along the way.    They were one of five teams C-USA that made it to the NCAA playoffs.

And if anyone overlooked them, not anymore after rolling to the Austin Regional title with a 3-0 record over three ranked teams, with one of the three being softball powerhouse Texas who hosted the event..

They are one of the final sixteen teams standing along with the big girls from the SEC, PAC-10 and Big 12 after qualifying for only their second super regional in school history in the last four years.    They are the only school left from a non-power conference and the only one of the 16 teams that aren't are ranked in both the ESPN.com/USA Softball and USA Today/NFCA Coaches top 25 polls.
.
The 43-16 Cougars are building toward that power team status.  They can take a giant step toward stamping the University of Houston softball program as a big name one by winning two more games and earning their first Women's College World Series berth in school history.

The Cougars take on the Oklahoma State Cowgirls in Stillwater, OK tonight and tomorrow with the winner moving on to the WCWS.

Will be watching to see if the Cougars can do it.

Posted by Monica Roberts at 6:45 PM