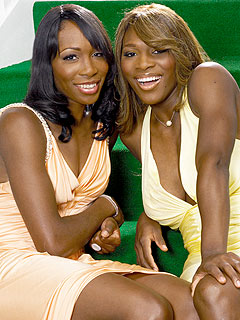 The Williams haters are probably happy about this, but my favorite tennis playing siblings will not be participating in the tennis proceedings over the next two weeks in Paris..

Big Sis and Little Sis have withdrawn from the 2011 French Open which was starting today.    It's the first time since 2003 that neither Serena or Venus will grace Stade Roland Garros with their presence.    Serena just returned to practicing on a regular basis last month after a foot injury and later a serious blood clot blew up the remainder of her 2010 season and took her out of the Australian Open.

If I had to guess when the Williams sisters plan on making their return to the tennis world, I'd circle June 20 on the calendar.    That's the starting date for their favorite Grand Slam tournament, Williams-don.

Oh by the way tennis world, the venue for next year's Olympic tennis tournament is the All England Lawn Tennis and Croquet Club.

Actually the French Open doesn't start until Sunday, the 22nd.