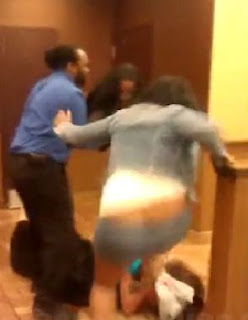 18 year old Teonna Monae Brown has been charged in the videotaped McBeatdown of 22 year old Chrissy Polis that went viral after it was posted on the Web last month.

According to WBAL-TV the office of the Baltimore County State's Attorney said Brown was indicted by a grand jury today on charges that included hate crime and first and second degree assault.

The 14 year old female juvenile accompanying Brown who participated in the attack is also facing the same charges, according to the office.

22 year old Polis was attacked inside a Rosedale, MD McDonald's restaurant on April 18.   The video of that assault was recorded by a now terminated McDonald's employee, posted online later that week and quickly went viral.

The video garnered thousands of page views on various websites and sparked outrage in the trans community..  The attack also happened just weeks after HB 235, a controversial trans rights bill that was stripped of public accommodations language died in the Maryland Senate.

Brown and the juvenile, who are currently being detained, were also charged with second-degree assault charges regarding Vicki Thoms, who tried to intervene during the attack, and Darrick Jones.


Stay tuned, this case is going to be followed by a lot of people inside and outside the trans community.