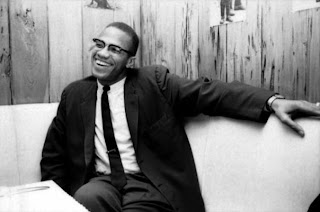 Today is the birthday of El Hajj Malik El-Shabazz, better known to the rest of the world as Malcolm X.  He was born on this date in Omaha, NE in 1925, lived a very interesting life in which he evolved numerous times  and was assassinated on February 21, 1965.

You were taken away from us far too soon.  Our country and African Americans would be in a much better place had you been around to continue your thoughtful evolution as a spokesman and leader for our people.

While we did not always see eye to eye on methods to solve the race problem, I always had a deep affection for Malcolm and felt that he had a great ability to put his finger on the existence and root of the problem. He was an eloquent spokesman for his point of view and no one can honestly doubt that Malcolm had a great concern for the problems that we face as a race

Rest in power and peace our shining Black prince.    You are missed.