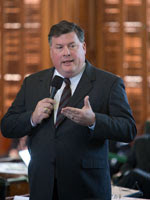 West, Ellis and Davis' offices have confirmed their opposition to SB 723, while Van De Putte's and Rodriguez's offices haven't.

The Van De Putte one is a mystery to us trans Texans because she is related to Chrisite Lee Littleton.   (yes, THE Christie Lee Littleton)

That leaves 7 Democrats on the fence, and the GOP needs only ONE to bring this bill to the floor.

Sen Carlos Uresti is the one that's rumored to be the shakiest on this bill.  One of his staffers was quoted in a recent Legislative Queery post as stating SB 723 'was a simple clean up bill'.

Yeah, right.  That's the lie that Sen. Williams is telling you.   To be honest, I'd love to find out if Sen Williams has any ties to either the Wharton Fire Department or attorney Frank Mann III.  .

Can we get some investigative journalists on that one?

It's an unjust clean up bill that will frack with the lives of trans Texans for decades if it passes and could have deleterious effects on transpeople elsewhere on the planet as well.    Two people who are definitely watching what's transpiring in Austin are Nikki Araguz and Joanne Cassar in Malta who have pending trans marriage cases.

But the good news is the clock it ticking toward the demise of this bill if the Democratic Senators can hang together one more week (and we keep letting them know we are watching them).   In order for this bill to pass, it must clear the Senate,  get a first reading in the Texas House, get referred to a committee and clear that committee before midnight May 21

So keep up the pressure and keep those calls and faxes coming.   The right wing haters are doing the same on their side now that they have been alerted to what we've been up to in terms of trying to kill this bill. .

These are the seven waffling senators.   Be nice when you call or fax them.

Thank these Texas Democratic senators for standing up for what's fair and just.