Mike Alvear Teaches How Not to Date A Trans Woman 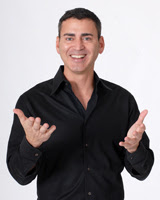 TransGriot Note: This guest post is courtesy of Renee of Womanist Musings

As you all know, I am a cisgender woman in a long term relationship.  This means that I have no idea about the various issues that trans women face when it comes to dating and in fact being in a relationship means that when it comes to dating I am the equivalent of a fish out of water.  I do however have the good sense to see when someone has left the arena of friendly advice, and gone straight into demeaning and oppressive.  From beginning to end, Mike Alvear the so-called Sexorcist, gets it wrong.

Let's start with the letter itself which claims to be interested in a woman who "is clearly in the process of or has already been sexually reassigned to a female." This immediately left me questioning, because while some women do go through an awkward stage, many pass successfully (please note: I hate the word pass but am unaware of a word that can be substituted). Something about the letter itself did not feel right and this feeling only intensified as I read the response.

You can always break the ice with jokes like, "Do you know where they put pictures of missing transsexuals? On cartons of half-and-half!" Or, "What do you call a transsexual woman with a strap-on? Nostalgic!" I kid. So, all you trannies out there, hold your fire.

It's unclear whether you want to meet her to be friends, date or have a swollen, slapping session of T-sex. I'm going to go out on a limb and assume you want to date her. In that case, you need to follow some general common-sense rules.

First, look your best. You're dealing with somebody who takes extraordinary measures to look like an appealing woman. She is going to expect her men to have some pride in their appearance.

I would also haul out your inner gentleman. T-girls are often even more feminine than G-girls (genetic). If you want to impress her, a robust application of manners will take you a long way. Whatever you do, don't try to get her in bed right away. One friend begged his T-date to go home with him with this classic line: "Come on, you can't get pregnant!" It didn't work.


Close your mouth before you catch a fly. Yes, this was supposedly advice on how to date a trans woman.  Even as a cis woman who has made mistake after mistake, I can see the issues with this.  Telling a transphobic joke and then using a slur to tell a group of people to be quiet about your bigotry is beyond offensive. You don't get to use a slur and then demand silence. So much for TLBG unity on this one. In case you are wondering, Alvear is a gay man.

If he has simply stuck to stressing not to fetishize the woman that the advice seeker was interested in, he would have been on point, but his continual use of the term "t girl," along with the suggestion that trans women treat femininity as some sort of artifice to be preformed, rather than just a simple expression of who they are, tells me that this man has no business discussing trans women period. Femininity much like masculinity, is a social construction because we are all raised from birth to perform our assigned genders, regardless of whether or not we feel that this performance matches who we are as individuals.

His privilege further comes shining through when he asserts that T-girls are often even more feminine than G-girls (genetic). Really?  What makes this man think that he has the right to sit in judgement of femininity period? Oh I know, not content with spewing transphobic hatred in public, he had to throw in a touch of sexism for extra spice and to round out his privilege.  This is about disciplining behaviour and it is not complimentary to get into a debate about who is more feminine simply because when it comes to trans women and cis women, the operative word is women.  We are all women and we certainly do not need any man to decide who is and is not doing it better.  It is also an extremely inflammatory and divisive comment to make beause it encourages us to see difference rather than commonality. This is not to say that trans women and cis women experience womanhood in the exact same fashion but that as women we share similar experiences despite whatever differences we may have. Mike Alvear is simply engaging the ever popular divide and conquer strategy to support his privilege.

I must say that none of this is surprising from a man who describes himself as a resident of Midtown, who "lives with Zack, his 60-pound girlie-boy vizsla, who likes to prance around Piedmont Park like a pre-op trannie".  I can only wonder when people will realize that comedy does not hide bigotry and in fact, only silences those who are socially marginalized, because then we are deemed to be unable to take a joke.  Nothing Alvear had to say was amusing or even remotely helpful, because while suggesting to the advice seeker that he should be respectful of trans women, Mike completely forgot to do so himself.  You cannot give advice, until you learn how to be respectful of the group that you are speaking about.