Another Day, Another Trans Assault

We haven't even reached Memorial Day yet and the signs are accumulating that it's going to be a long, uncomfortable summer for transpeople.

If it isn't the po-po's jacking with us, it's some fool who has self esteem issues that wants to take them out on us to make themselves feel more like a man or woman.

As the legal process continues to move forward in the wake of the Chrissy Polis McBeatdown in the Baltimore burbs, word of another transperson being attacked in Fredericksburg, VA is racing across the Transophere.

The 32 year old victim was leaving a convenience store near her home at 3:30 PM on May 21 when she was surrounded by two cis males and a cis female, taunted, and then assaulted.   The attackers fled in two vehicles  and the victim was able to get the license plate numbers of both vehicles. 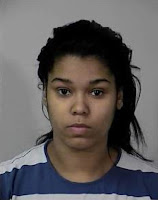 18 year old Laqueta Webb was later arrested for malicious wounding by mob and is in jail without bond.   The two male suspects involved in the attack have yet to be arrested, but have been identified..

Virginia does have a hate crimes law on the books, but it doesn't cover sexual orientation or gender identity.

But long story short, this bull feces is getting old.   I'm just waiting for the day when these wastes of DNA who get their jollies beating on transpeople runs into the wrong one.

One who is more than prepared to defend themselves with either boxing or martial arts training or simply busts a cap in them.