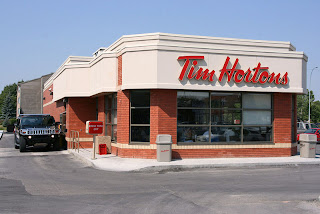 Saturday afternoon I was in an extended phone conversation with the brilliant editrix of Womanist Musings when at one point I heard Mayhem begging his mom to let him talk to Auntie Monica.

Renee handed him the phone and I spent the next ten to fifteen minutes talking to a very chatty Mayhem.

After getting an opportunity to congratulate Mayhem for getting promoted to Grade 1, him asking me what was I doing deep in the heart of Texas, and then him telling me how his day was going, the conversation turned to his favorite subject, Tim Horton's.

Mayhem asked me if I had one in Houston.  I explained that even though Tim Horton's has been steadily expanding south of the border and has over 500 locations in the States, they are clustered in the Midwest and northeast US.

I told him the closest location to me right now is near Fort Knox, KY and he innocently asked me how do I survive without 'Timmy's" before he handed the phone back to his mother.

Easy, Mayhem.  It's called Shipley's Donuts and Blue Bell ice cream.   We had Krispy Kracks opening up here when I left but Shipley's and a dispute with the local franchisee sent them packing by 2006.


As I mentioned, Tim Horton's is a national institution in the Great White North, and as evidenced by Mayhem and my Ice Capp loving best friend, it seems a Cannuck's bond with their beloved 'Timmy's starts early in life.  In addition Tim Horton's is probably the most recognizable slice of Canadiana next to the maple leaf and the Mounties . 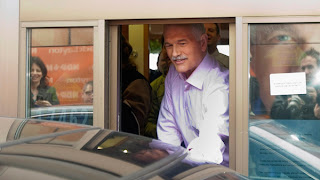 And if you think I'm kidding about that, a few years ago an 18 wheeler was shipped to Afghanistan on a US C-17 transport stocked with Timmy's coffee for Canadian Armed Forces troops stationed there.

During the recent Canadian election campaign I saw the various party leaders photographed either working behind the counter of a Tim Horton's (Harper), working in the Timmy's drive through window (Layton) or buying coffee and talking to voters in them (May, Ignatieff, Harper and Layton) .


The Bloc Quebecois's Gilles Duceppe was the only party leader not photographed by the Canadian media during that just concluded campaign in a Timmy's.  That may have been another factor in why he and his party lost 45 seats and he's no longer the BQ leader, much less sitting in Parliament. 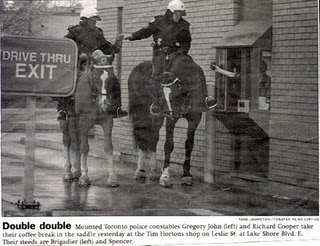 There's also the increasingly iconic photo of two Toronto police officers getting coffee at a Tim Horton's drive through while on horseback.

Timmy's is on every Canadian's brain to the point it has recently become an issue in the upcoming October 6 Ontario provincial election in the form of a political gaffe.

Tory MPP Garfield Dunlop made the mistake of saying in the Ontario Legislature that “a Tim Horton PC government will protect our communities by making sex offenders wear GPS bracelets that track their whereabouts.” instead of a Tim Hudak government. 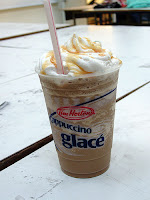 The Liberals have pounced on that by referring to Hudak promises as 'Timbits', and making doughnut references to describe the just released Hudak campaign platform budget.

So no, Mayhem I don't have Timmy's here.   The only way that is going to change is if we get someone who purchases the franchise rights for the Houston area and starts building a few Timmy's locations as a result.

The only way I'll get to have a double double, a breakfast sandwich, drink an Ice Capp or scarf down Timbits any time in the near future is if I'm blessed enough to visit y'all.