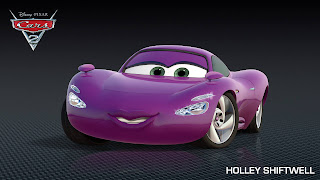 With Cars 2 having a more international theme and storyline,  I found interesting the new characters that will pop up in the upcoming film. 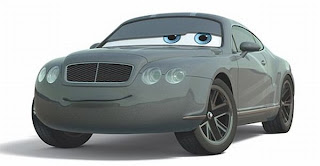 In addition to Team Lightning McQueen getting to experience the hospitality of Luigi's hometown when the World Grand Prix's second race takes place in Italy, action takes place in Japan and England as well.

The movie makes its British debut on July 22, and there will be more than a few familiar characters, voices and a home country feel for British audiences to enjoy.

In addition to seeing iconic vehicles like London bus Topper Deckington III, London cab Chauncy Fares, and Sgt. Highgate it was interesting to note that Queen Elizabeth II was immortalized in the film along with the just married Prince William.

Character Art Director Jay Shuster was well aware of the tricky task of respectfully depicting a national sovereign for this movie
. 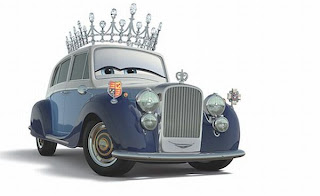 Specifically with The Queen’s design it took some careful stepping as we, of course, were on hallowed ground emulating a nation’s sovereign as a car. The Queen’s design in our film is inspired by the elegant lines and paint schemes of British car designs of the finest vintage.

In addition to the Royal Family representatives, British Formula 1 champion driver Lewis Hamilton is one of the racers in this film.

I thought (and my Formula 1 loving friend will probably agree with me) it should have been as a Formula 1 race car to be a stickler for authenticity, but the Hamilton character as one of the World Grand Prix racers in this movie still looks cool and better yet, he'll be doing the voiceover for it..

And yes, the British theme of this movie wouldn't be complete without me mentioning the Sir Michael Caine voiced British intelligence agents Finn McMissile, his sidekick Siddley and agent Holley Shiftwell.

Think I need to reconsider eating buttered popcorn when i go see this one and get fish and chips instead..
Posted by Monica Roberts at 12:00 PM