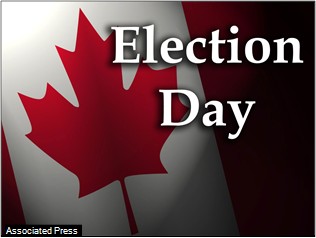 Our Canadian cousins have (and in some cases still are) casting ballots in what promises to be an exciting and historic federal election.    In a few hours the political drama will begin to take shape and we'll learn the answers to how the Drive for 155 shook out..

Live south of the border like I do but want to be informed about how the election went?   C-SPAN 2 will simulcast the CBC coverage that starts at 9 PM CDT.    Don't bother going on Twitter, Facebook, Canadian online newspapers or any online media yet    Due to Section 329 of the Canada Elections Act that attempts to ensures that all sections of the country go to the polls armed with the same info the comment sections are shut down until 9 PM CDT until the polls close in the western timezones.

If you Canadian TransGriot readers violate Section 329, hope you have $25,000 handy.  That's the fine for violating the Act.

I'll definitely be checking with my Canadian friends later and finding out how their Election Day went on various section of the country as I watch C-SPAN 2 and the CBC team pontificating on the 2011 election.