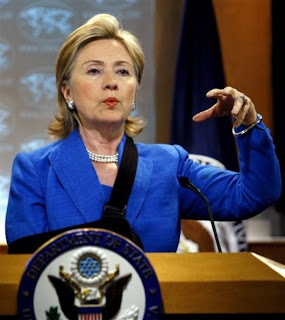 I still have much love for Secretary of State Hilliary Clinton despite the contention 2008 Democratic presidential primary.   She's made it clear she's a supporter of the rainbow community, but I still have my doubts that if she were in the Oval Office right now the trans community would be seeing the explosive progress federally we have seen under the Obama Administration.

Then again, based on the fact that surgery is no longer a requirement to get a gender code change on a US passport, maybe President Clinton might have been as trans friendly as President Obama has undeniably proven he has been.  Anyway, stepping off the electronic soapbox and back to the post.

Here's her taped pride message for the rainbow community