NY Trans Community Speaking Out Against Stop And Frisk 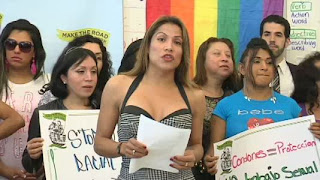 The NAACP is planning a silent march tomorrow against the odious racial profiling  stop and frisk policy that the New York po-po's are using in a way to disproportionate manner against now white people in the Big Apple.

Check out Agnes Chung's report about transpeople in the Jackson Heights area calling out the NYPD stop and frisk policy and how it is deleteriously affecting them.

There was also a meeting at the historic Stonewall Inn involving Rev Al Sharpton and Benjamin Jealous of the NAACP.discussing this issue as well that reported in the Village Voice.
Posted by Monica Roberts at 2:00 AM