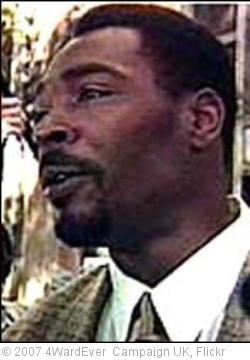 From Renee of Womanist Musings

The beating of Rodney King was an example of police brutality that rang throughout the African Diaspora.  Watching the video, we knew that all that separated us from King was a simple matter of time and place.  I remember seeing the video for the first time and believing that finally, cops would be held accountable for their actions in the Black community, only to be horrified when the not guilty verdict was delivered.

As a Canadian, I remember most the smug reporting of our media on this issue, as though Canada does not have its own history of police brutality against people of colour, or its own history of criminalizing driving while Black. There was a failure to understand why this event resonated so deeply with us and it was cast repeatedly as an American issue, rather than an issue of race, which evenly effects all of the descendants of the African Slave trade.

It was with a heavy heart that I learned King was found dead at the bottom of his pool on Sunday.

King was not the perfect victim we were reminded repeatedly, as though one only had to be good  to avoid his fate, as though Blackness in and of itself doesn't have a history of being marked.  To even go down this road, one would have to ignore the impact of living in a White supremacist state as a person of colour. He was reared in a world that told him repeatedly that he did not matter and the verdict itself proved this to be true.  No matter what King was guilty of, no one deserved to have their civil rights violated like this, yet the excuses kept coming.

As Los Angeles erupted in righteous rage, King begged for peace, asking famously, "can't we all just get along?"  The answer then, and the answer now is no.  There is no getting along with White supremacy because it preys on our lives, it preys on our children and it preys on our souls.  Police brutality continues to be a problem in our communities. Racist Stop and Frisk policies continue to disproportionately target Black and Latino communities, and yet we are told that this is a public good and that it's about safety.  Is the world really that much safer believing the lie that only POC commit crimes? What about the psychological effect of  knowing that your race is enough to make you a target?

Our clothing and our manner of presentation is at fault and threatening we are told and yet, even wearing a suit and leaving rehearsal, Giancarlo Esposito of Breaking Bad and Once Upon a Time was recently stopped and frisked at gunpoint.  What could he have done differently?  How should he have been less threatening?  He isn't even the only celebrity of colour to receive this treatment, just the latest. There is no rich enough, or good enough, to avoid being a target of racism.  When you have a cop bragging that he "fried another nigger,"  how exactly is this stop and frisk policy doing any good?  You'll all be relieved to learn that he isn't a racist though. This is why we can't just all get along.

There is some suspicion surrounding King's death and the statements of his girlfriend.  How and why he died is something that will be debated and questioned for some time to come I suspect.  At this moment however, what matters to me is the legacy that he left behind.  He inspired an entire generation to put behind its apathy and fight.  Many still view the riots as simple rampant lawlessness, rather than a result of a community in so much pain that it had no choice but to implode.  The beating of Rodney King revealed to the world the truth of what justice means when you are a person of colour and all of these years later, not a damn thing has been done to fix this situation.  Despite a Black president, and protests by Black civil rights leaders nothing has changed.

Rodney King was not a perfect man and such an expectation is not only unrealistic, it is victim blaming. His life has been dissected and twisted much in the same way that every single Black victim of White supremacy has experienced.  I don't seek now to re-envision him as a paragon of goodness because even that would be disrespectful.   If we remember one thing about King, we need to remember that he was human and respect all that this entails.  His humanity should have protected him, it should have made the brutality perpetrated against him unthinkable and but for the colour of his skin, it might very well have.  King deserved better than life gave him and I hope that in death, he finds the peace he was never able to achieve in life. For the rest of us, there can be no peace, as long as we understood to be sub human.