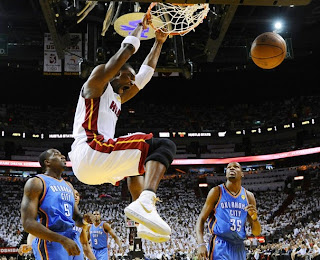 Well, after five games, it's over.  The Miami Heat taught the younglings from Oklahoma City how to play championship basketball and closed out the NBA Finals with a resounding 121-106 thumping of the Thunder to close out the series 4-1 and claim their second NBA championship in franchise history.

And yes, it's Friday, so you know what that means.  It's time for Moni to dish out this week's edition of the TransGriot Shut Up Fool Awards.   Time for everyone to discover who exhibited championship level stupidity and ignorance this week and shine a bright spotlight on it.

Honorable Mention goes to congressional car thief Darrell Issa (R-CA) for pimping a partisan witch hunt and bogus contempt of congress citation aimed at Atty General Eric Holder whose only crimes are successfully doing his job enforcing the 1965 Voting Rights Act against the Republican's racist Voter ID suppression laws and being a Black man in that position.   And you wonder why African-Americans have contempt not only for the Republicans in Congress, but your party as well.

Honorable Mention number two goes to Michigan state Speaker James Bolger (R) and Michigan state majority leader James Stamas (R) for banning state Rep Lisa Brown (D) for saying 'vagina' on the House floor during a debate on a bill pimping reproductive rights restrictions and Rep Barb Bynum (D) for referring to vasectomies during the same floor debate..   The conservafools were too cowardly to tell Reps Brown and Bynum to their face they'd banned them but that par for the neofascist course for them.   That triggered a performance of The Vagina Monologues on the steps of the Michigan state capitol building overseen by play creator Eve Ensler in Lansing Monday night featuring Brown, Bynum and other female Michigan state legislators..


The Shut Up Fool award for this week goes to Wisconsin GOP US senate candidate Eric Hovde, who is sick and tired of media writing sob stories about the poor.   Please, Tammy Baldwin, kick his azz November 6 so I can gleefully read a sob story about his conservacruel behind losing.