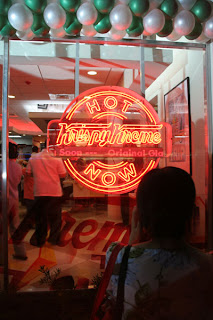 As I mentioned in an earlier post, today is National Doughnut Day, and yes, I took my opportunity this morning to enjoy my free extra one at the Shipley's down the street from me..

But this Friday is also the day I reserve to shine a bright spotlight on the fools, fools or group of fools that inhabit our work and poke holes in the specious logic and lies

The first honorable mention this week goes to the parents of the six year old who is singing a little hate the gays ditty in his Indiana church to the cheers of the congregation and a audible shout of "That's my boy.".

With parents and a homophobic church like that, I hope and pray that kid doesn't turn out to be a rainbow family member, but it would be delicious karma wise.

Our second honorable mention goes to Donald Trump Chump for doubling down on the birtherism and making an ass out of himself again.

Our third honorable mention goes to Jay Townsend, spokeperson for Rep Nan Hayworth (R-NY) who was providing evidence that the GOP is nothing more than the American Taliban with this comment aimed at Democratic female senators.

But enough jibber-jabber as Mr. T would say.   This week's Shut Up Fool award.winner is Seneca, Kansas hate pastor Curtis Knapp who also decided to channel his inner Nazi and advocate from the pulpit a Final Solution to the gay problem.

Wow...really getting sick of the faith based haters and evil (yeah I said it) Teapublifools.  It also points out the fact this election is literally for the heart and soul of our nation.  It's why they need to be beaten and utterly crushed at the polls November 6.

Oh yeah.  Curtis Knapp (not even giving you the courtesy of being called reverend after that little genocidal diatribe) shut the HELL up fool.