Since June is Pride Month, in honor of the occasion The Root put together a list of 20 notable Black LGBT people    I was curious to see if things had progressed in the African-American blogosphere since I had to call the Grio out about a trans free LGBT leaders list in 2010. .

On the one The Root compiled many of the folks on this list I have had the pleasure of meeting and I admire such as Aisha Moodie-Mills, Phill Wilson, and Donna Payne are on it.   The others they included are familiar ones like poet Staceyann Chin, Jonathan Capehert, Don Lemon, Sapphire, Keith Boykin, Jasmyne Cannick and Wanda Sykes.

What I didn't see in this Black LGBT list was you guessed it, Black trans people. 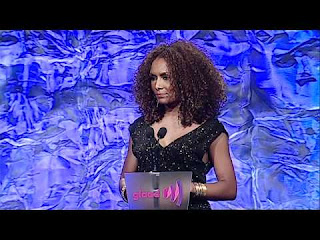 No Janet Mock (who made the Grio's 100 list BTW).  No Laverne Cox.  No Kylar Broadus, Isis King, Valerie Spencer, Rev. Louis Mitchell, Miss Major, or even some award winning blogger who was part of the first ever trans panel at Netroots Nation 2012..

Just the same old crap, different day in terms of Blackosphere media outlets putting together these Black LGB(t) lists and not including any trans people in them.

Bottom line, if you're going to take the time to put together a list that purports to be representative of the LGBT community leadership, then I, the trans community and our allies expect that trans people be included in said list if you claim it is a TBLG one.

Far too fracking often these trans free lists are overwhelmingly LG dominated, B peeps as an afterthought with no T ones.

We aren't ashamed of being Black and trans but the constant erasure and the frequency with which it happens make us wonder if you're ashamed of us.

Will be eagerly watching the upcoming NAACP convention next month in my hometown to see if Julian Bond keeps the promise he made in LA last year to ensure the next NAACP convention town hall has trans representation on that panel. 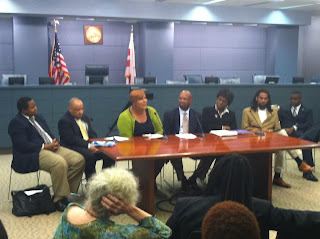 And the 'we can't find any trans activists' excuse doesn't wash now any more than it did two years ago.

Sadly what I said in the post calling out the erasure and non- inclusion of Black transpeople on Black LGB(t) lists is applicable in this one as well.

My point is that if our own people don't or won't show us some love when you compile these leadership lists, and you write for one of our leading blogosphere sites directed at the African-American community gay and straight, how in the hell can we Black trans leaders who are doing the work expect the predominately white TBLG community to respect us as well?

It's bad enough that Black transpeople get shut out of the predominately vanillacentric upper middle class narrative and get very little to no media attention except when we get killed in a hate crime.   It's disappointing and hurts even more when we get ignored by our own media outlets.

Posted by Monica Roberts at 4:55 PM