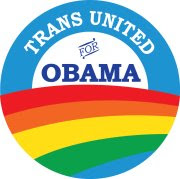 As I've stated more than a few times on TransGriot, while elements of the GL community have sniped at President Obama and in some cases delusionally called him 'the worst president ever on gay issues', as far as the trans community is concerned, he's been the best president ever on trans issues in US history.

A national volunteer organization was recently formed called Trans United for Obama (TU4O) that is designed to rally transgender people, supporters, allies, and families to re-elect President Barack Obama and ensure he is taking the oath of office on January 20, 2013 for his second term.

President Obama has led so many historic positive policy changes for transgender equality--- more than any elected official in history! We are involved on all levels, from door-knocking, doing data entry, fundraising, registering voters, and getting the message out that President Obama must be re-elected... all the things a victorious campaign and our community needs.

I am personally inviting you to be a part of this community.

We are trans leaders, advocates, educators, bloggers, authors, and allies out to educate people about the historic accomplishments that the Obama Administration has made in the past four years to secure equal rights and protections for transgender, transsexual and intersex identified, and for for all LGBT Americans.

Did you know that more has been accomplished by the Obama administration for trans rights equality than all 43 other presidents combined? For example:
You can read additional accomplishments here

This is where you play a part. We are standing with our President and ask that you join us, and help build TU4O!
So join us! Together we can re-elect President Obama for another 4 years of solid progress, legislation and policy for the trans community.

Sign up now to join Trans United for Obama.

Donate to the campaign

Don't forget to donate whatever you can to get President Obama re-elected; $25, $50, $100 can go a long way to help protect our community!