Time For A Trans Juneteenth

On June 19, 1865 Union Major General Gordon Granger read General Order No..3 from the balcony of Galveston's Ashton Villa and declared that all Texas slaves were free.

Today I submit it is time for the great great grandchildren of Texas freedmen and freedwomen to have their own Juneteenth and engage in some emancipation of our own.

Last Friday night I attended an over two hour local meeting in which several African American transwomen and one of our cis woman supporters were expressing their frustration about the invisibility, marginalization, isolation, and negative 'unwoman' images we are dealing with as Black transpeople interacting with the trans communities of Houston and the state of Texas.

I did a lot of listening during that meeting as some of the participants not only expressed their joy at meeting other Houston area transpeople concerned and disgusted about the utter lack of support infrastructure geared toward the African-American trans community of Houston and in the state of Texas, they talked about many of the same issues I brought up in the Modest Proposal post I wrote in the wake of my return to Houston from last year's Out On The Hill/ALC event in Washington DC. 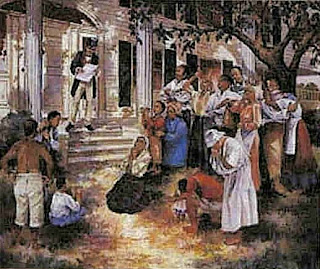 And I was heartened to learn they are just as fed up and frustrated with the situation as I am about it.

It's Juneteenth 2012 and it's time for trans Houstonians and trans Texans of African descent to step up our leadership game just like our great great grandparents did when they walked off the plantations and into freedom after the Emancipation Proclamation news and General Granger's Order No. 3 traveled with lightning speed across the state.

In 2012 the plantations that trans African American Texans inhabit are primarily mental ones.  We need to emancipate ourselves as a community from the shame and guilt issues that revolve around us being trans men and trans women and stride boldly toward living better quality lives, having higher expectations and pride in ourselves.

We don't know our history and who our heroes and sheroes are.  We have transpeople who would like to have a regular job and not have to depend on sex work to pay the bills but don't know who or where to turn to or who can help them to achieve it.  We have folks who would make wonderful trans role models or leaders but stay closeted out of fear of losing their jobs    We have transpeople of color with big dreams they would like to achieve.   We also have Texas African-American transpeople who are sick and tired of being saddled with the negative transfeminine images or being judged by the worst of our community and not our best people.

It is also time for African-American cis Texans and Houstonians to realize that we trans Texans are part of the kente cloth fabric of the African African community.  Our issues are your issues and vice versa.  It is past time our churches and legacy organizations stop hating and ignoring us but embracing their trans children.  We have skills, talents, and intelligence that we can no longer as an African American community afford to throw away.  We African descended transpeople want to contribute those talents to the uplift of our community, but we need help African American cis allies so that we can make that happen.  .

Barbara Jordan once said,"The majority of the American people still believe that every single individual in this country is entitled to just as much respect, just as much dignity, as every other individual. "

I believe that trans Americans deserve that respect and dignity, and so do the trans people in my home state.  It's also critical that trans people of color in Houston, Texas and the nation get to experience that as well considering the state of the Black trans community.

Our great great grandparents in the Lone Star State in Houston, Austin and Mexia pooled their money in the late 19th century to buy pieces of property that became the parks that we held those Juneteenth celebrations in.   They also banded together to build community for the long term benefit of future generations.   They were visionary leaders in far more challenging times than we transpeople face in the second decade of the 21st century.

Some of our ancestors ended up getting elected to the state legislature and passed the laws that set up the free Texas public education system that we benefited from as an example of the visionary thinking prevalent in our great great grandparents generation.

We must do it not only for ourselves, but so that we can be a stronger and more cohesive part of our African American family, the rainbow community, society in general and all the communities we intersect and interact with.  We must make certain that once we set our goals and come to a consensus on what we want to achieve and how our Lone Star trans community should look we exercise maximum unwavering effort in achieving them.

It is not going to be an easy process.  There will be much of hard work involved and those with nanosecond length attention spans are not needed for this task.  Neither will people be needed who don't love this community, want to see it survive, thrive and prosper and aren't committed to the long term success of it.

Neither will the change we are needing to happen occur instantaneously.  There will be periods of success followed by periods of backlash and retreat in reaction to our success by the Forces of Intolerance.  There will be at times contentious discussion amongst ourselves and our allies as we grapple with this long term and necessary project.

And yes, the haters will come out to play.

We will have people who like the status quo situation we find ourselves in, who fear us closing ranks and will fight us tooth and nail to ensure that the Trans Juneteenth doesn't happen.   They will lose because we are on the morally correct side of history.  People are coming to the realization that fighting to ensure the human rights of trans people expands their own human rights coverage.

It is past time we came together for the good of all Lone Star transpeople of African descent, our allies of all colors and build that community that we can be proud of.

It also must be done.  We African descended Texas transpeople can no longer afford to muddle around for another wasted decade isolated,  invisible to the world at large, ignorant about what's going on around us, and feeling impotent socially, emotionally, politically and economically.

It is time for us to be the proud Black trans men and trans women we are, own our power and write our own proud chapter in Black Texas history in the process.

What better day to start that process of the Black trans community of Texas owning its power than on Juneteenth?
Posted by Monica Roberts at 12:00 AM