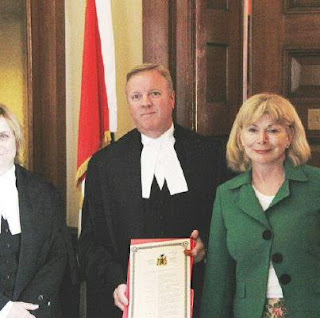 The final stage in making Toby's Act the law in the province of Ontario occurred earlier this week.

As a reminder for those of you who have been following my posts concerning this north of the border trans human rights issue, Toby’s Act enshrines gender identity and gender expression into Ontario’s Human Rights Code.

Bill 33 as it was known has been a multiyear effort spearheaded by New Democratic Party MPP Cheri DiNovo for several years.

Bill 33 had tri party support in Queen's Park in this session of the Ontario Legislature was also sponsored by Liberal MPP Yasir Naqvi, and Progressive Conservative MPP Christine Elliott.

It passed unanimously on Third Reading last week and I discovered that it was granted Royal Assent on Tuesday by the Lieutenant Governor of Ontario.

So it's official.  Toby's Act is not only the law in Ontario, it now becomes the first province and the second jurisdiction in Canada to protect the human rights of trans people.

And just in time for pride, too.
Posted by Monica Roberts at 1:00 AM