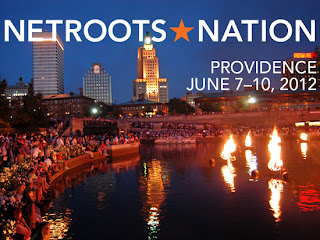 After a travel day that started for me at 6 AM CDT and ended with me falling asleep in my hotel room a little after midnight on the 6th to the somewhat depressing news that Scott Walker survived his recall election, I finally arrived in Providence ready to partake in the Netroots Nations happenings starting officially tomorrow.

While I had an enjoyable and emotional at times transit through IAH and got reacquainted with some of my former co-workers on my initial United flight out of Houston yesterday afternoon, was a bumpy ride up to Cleveland.  I was early getting there, but  was delayed on that next leg out of Cleveland to Providence because the commuter plane hadn't left Kansas City yet.

It eventually arrived and I had a wonderful conversation with my seatmate on the CLE-PVD leg that made me forget I didn't get to my hotel until 11:25 PM EDT.   My room also made up for the anxiety that built up in catching the last bus from the airport to downtown by mere seconds.

But today is about me registering for the conference, getting the lay of the land in the hotel area, attending the LGBT Connect event I'm looking forward to and eagerly awaiting the meeting with myself and my fellow panelists.

And yes, TransGriot readers, I'll be chronicling the happenings on these electronic pages as well.
Posted by Monica Roberts at 6:26 AM