2012 Williams Watch-Serena To Third Round 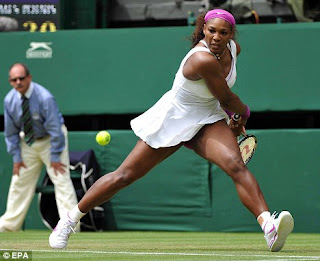 Sixth seeded Serena got the first week of The Championships off to a good start when she knocked off Barbora Zahlvalova Strycova off in straight sets 6-2, 6-4.

She earned a second round Centre Court match with Hungary's Melinda Czink and wasted little time or energy in expeditiously getting herself to the third round with a 6-1, 6-4.straight set victory.

Serena seems as though she's been on a mission and is determined to get that fifth Wimbledon singles title after that inexplicable stumble in Paris last month, but it's only the first week.