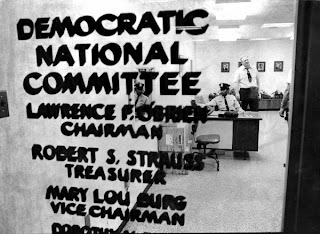 The next time someone gets the urge to rag on a person who is working as a security guard to pay their bills or derisively call them a 'rent a cop', point out that it was an African-American security guard that got the ball rolling 40 years ago today on the scandal that eventually took down the Nixon presidency.

Then 24 year old Frank Wills was working his midnight to 7 AM shift at the Watergate Office Complex on the night of June 17, 1972  when he discovered at 1 AM that someone had taped the latches on several doors (That allows the doors to close but remain unlocked.)  Wills removed the tape on those doors and when he returned an hour later to discovered those same doors were retaped he called the police which resulted in five people being busted inside the Democratic National Committee headquarters offices..

The five men busted in the DNC office burglary, Virgilio González, Bernard Barker, James W. McCord, Jr., Eugenio Martínez, and Frank Sturgis, were charged with attempted burglary and attempted interception of telephone and other communications and convicted on January 30, 1973.

However, when it was discovered that one of the burglars was a Republican Party security aide and money the burglars had been paid for expenses was traced by the FBI back to a fund tied to the aptly named CREEP (Committee to Re-Elect The President), the scandal widened throughout the summer of 1973 and into 1974 as more troubling details emerged. 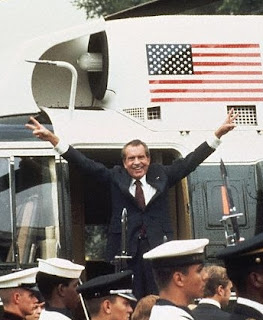 It eventually ended with the resignation of Richard Nixon from the presidency on August 9, 1974 when he was facing an almost certain overwhelming Senate vote to impeach and remove him from office and the Democrats in a Watergate induced 1974 midterm backlash picking up five Senate seats to add to their majority there and 49 seats in the House.  There was also an overhaul of American Bar Association  regulations to stave off federalizing that responsibility from the various state bar associations, amendment of the 1974 Freedom of Information Act, campaign finance reform and the enactment of the Ethics In Government Act.

68 people were charged and 49 convicted of various offenses including members of the Nixon administration.  The pardon of Nixon by President Gerald Ford is cited as one of the factors that led to Jimmy Carter being elected president in 1976.

The House Judiciary Committee Impeachment hearings on July 25, 1974 also resulted in a freshman Democratic House representative from Texas named Barbara Jordan making one of the most memorable and still quoted speeches of those hearings 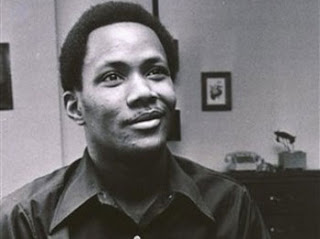 And as for Frank Wills, the African-American security guard who discovered the burglary that brought down the Nixon Administration?

Sadly while other people including the Nixon Administration folks who instigated the scandal got paid with their best selling books and speaking tours, Wills' life was never the same.

He quit his $80 a week job after the security company refused to give him  raise for his role in breaking the Watergate scandal.  Washington business and organizations dependent on federal funding refused to hire him for fear their federal funding would be cut off in retaliation.  He later died in poverty from a brain tumor in Augusta, GA on September 27, 2000.

But the Watergate scandal is a lesson to ponder going into this 2012 presidential election (that we liberal progressive never should have forgotten) that the Republifools will go to any lengths including violating the law and the Constitution they claim to reverently respect to win an election and cling to power.
Posted by Monica Roberts at 12:00 AM