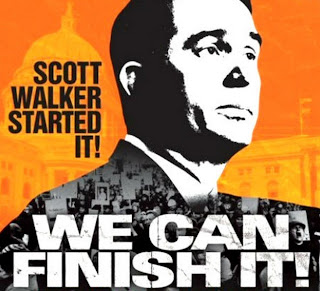 It's Tuesday June 5, the day you peeps in Wisconsin worked hard to make happen.  Now it's time to bumrush the polls, recall Scott Walker the four Republican senators and you lieutenant governor and end the GOP dictatorship . Grab a friend (or two or three or four) and take them to the polls with you to help make it happen..

The Republifools are already running 'scurred'.  Walker got eviscerated in the debate with Barrett since all he can do like any Republican is lie through his felonious teeth and run false attack ads.  Reince Priebus is already whining about 'voter fraud'.  The conservafool media is on the attack.

But I'm not telling you peeps in the Badger State stuff y'all don't know already.   The eyes of the nation and the world are on you,. Make us liberal progressives proud, be agents of your own liberation and show us the Badger State ain't taking this conservamess.

Handle your electoral business, Wisconsin..   .
Posted by Monica Roberts at 7:00 AM