We Know Why You Conservafools Are Hatin' On AG Holder 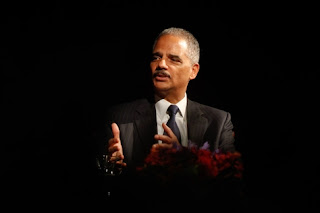 Been watching the jacked up right wing shenanigans playing out this week in Hollywood for Ugly People (AKA Washington DC)  concerning the bogus Fox generated Fast and Furious kerfluffle that BTW, started under the previous occupant of the Attorney General's office Michael Mukasey

We know why y'all hate Attorney General Eric Holder.

Besides the obvious facts that he was appointed to the job by President Obama and he's African-American,  Issa and his fellow conservafools hate Attorney General Holder because he's not defending DOMA, is vigorously enforcing the Voting Rights Act, taking down your ALEC sponsored voter suppression laws and going after your Juan Crow anti-immigration laws.

House Minority Leader Nancy Pelosi (D-CA) basically said the same thing I'm saying in this post. "It is no accident, it is no coincidence, that the attorney general of the United States is the person responsible for making sure that voter suppression does not happen in our country," Pelosi said at her weekly briefing. "These very same people who are holding him in contempt are part of a nationwide scheme to suppress the vote. They're closely allied with those who are suffocating the system: unlimited special interest secret money."

Sen John Cornyn (R-TX) let the comment slip about Holder fighting Texas' voter suppression laws during the recent Senate hearing that was held on Fast and Furious and called for Attorney General Holder's resignation ."You still resist coming clean about what you knew and when you knew it with regard to Operation Fast and Furious," Cornyn charged. "You won’t cooperate with a legitimate congressional investigation, and you won’t hold anyone, including yourself, accountable. Your department blocks states from implementing attempts to combat voter fraud. In short, you’ve violated the public trust, in my view, by failing and refusing to perform the duties of your office."

You Fox Noise watching conservasheeple may believe the bull feces that's being fed to you by the conservamedia but reality based America knows what's up here.  Y'all think that by stirring up a replay of the Shirley Sherrod episode and stirring up all this crap, you can get him to resign.

So keep on hatin' him conservafools.   We know why you hate him.
.
Posted by Monica Roberts at 5:00 AM