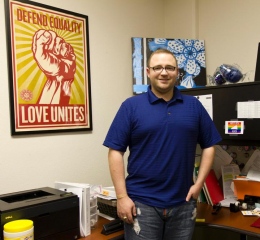 After five years as the coordinator for the LGBT Center at Texas A&M, Lowell Kane is leaving Aggieland and headed to Purdue University.  I along with my Aggie rainbow family and the Houston area rainbow community are sad to see him go.

I met him and some of the LGBT Aggies back in 2010 when I attended my first Texas Transgender Nondiscrimination Summit at Rice University mere weeks after I'd moved back home.

It led to Texas A&M being one of the first schools inside the Lone Star State I had the honor of speaking at post return home in November 2010 and me getting to spend some quality time on its campus with him and some of the wonderful students there.

While at Texas A&M, Kane received several awards, including the Diversity Service Award and the Phyllis R. Frye Advocacy Award. During his time as program coordinator, the Aggieland campus climate toward the GLBT community improved, according to the LGBT Friendly  Campus Climate Index. 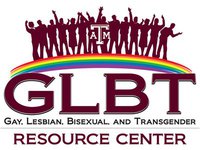 He was also one of the founding members of the now thriving LGBT Center on the Texas A&M campus, a first of its kind program for a Texas college campus and he was named its Program Coordinator in 2007.

It was so successful conservafool state Rep. Wayne Christian (R-Center) tried to kill it during the 2011 legislative session  by starving LGBT centers of funding and banning their housing in state owned buildings.  The Texas House Democrats made him back off by threatening to scuttle the entire school financing bill if he persisted in his phobic lunacy.

When he gets to Purdue he'll have a similar situation to the one he encountered when he arrived in College Station in 2007 in terms of no GLBT center or full time staff devoted to advocacy work on behalf of that student population but Kane is relishing the challenge.

“I did it here, and I know that I can do it there,” Kane said in an interview in the Batallion. “In fact, I’m going to be more informed because I’ve had five years of wonderful experience here at Texas A&M that I’m going bring with me to Purdue.”

There will be a farewell event for Kane on the A&M campus starting at 3:30 PM today at the LGBT Center in Cain Hall's POD (B111) that I sadly can't attend, but best of luck to you Lowell in your new position.

For you folks at Purdue who read this blog, you're about to get one fantastic person headed your way and one we're sorry our community is losing and are definitely going to miss.
Posted by Monica Roberts at 12:00 PM