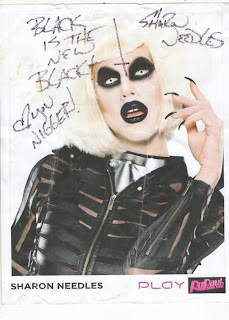 Why am I not surprised that a RuPaul's Drag Race winner doesn't have a clue why it is not fracking cool to sign a photo with 'Black is the new Black ♥ you Ni***r."?

Especially since the creator of the show supports a drag queen who thinks (and the white gays who support the tired 'act') it's humorous to watch a obese gay white male dress up in blackface and portray 'a welfare mother with 19 'chirren' all named after venereal diseases and discount stores.

There's been an increasing firestorm of criticism being aimed at Needles from the rainbow POC court of public opinion  who considers that autograph in the photo problematic.

The vanillacentric circling the rainbow wagons around Needles is only pouring gasoline on the smoldering anger of African American rainbow peeps and especially when we hear the tired 'lighten up' comment come of the mouths of Sharon Needles fans.

The anger of the African American SGL community went up a few more notches after this YouTube video surfaced with Needles trying to gaysplain it.

The other night me and a couple of my friends went out to have a good time, and there's this young thing. I call her a "thing" because, you know, I don't know how to tip-toe around gender rules or queer politics. I'm 30 years old, rich, and famous; I don't have to deal with that shit anymore, you know what I mean? So we'll just call them "him"/"her"/"thing," whatever. And you know she really finds my shows offensive. ... So anyway she got upset that I paint myself brown, that I would use language that she found offensive. ... She made me an unnecessary poster child for post-racial change."


Sniff sniff, I smell industrial strength vanillacentric privilege in the rainbow air from Coady.   And yes Aaron, whether you and your vanillacentric fan base think otherwise, you exist with white privilege.  If a POC is telling you that your show is offensive and why, maybe you need to stop and think about that for a moment and then correct you behavior instead of trying to defensively justify it. 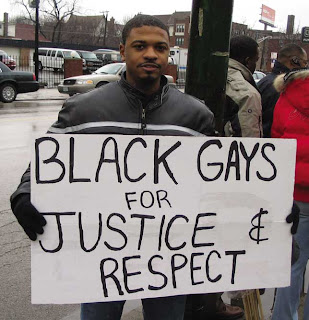 Let me say this once again for you peeps to understand.  Just as you hate being called the f-word that rhymes with maggot, we don't like the n-word.
It is not okay to perpetuate negative stereotypes and problematic language and flying the rainbow flag doesn't change that or give you a pass on that.

And Aaron, you can best believe I will address the transphobic nature of what you said in that YouTube video in another post

It is NEVER okay for you white peeps inside or outside the rainbow community under ANY circumstances to say the n-word.  When it comes out of your mouth we're instantly thinking about all the four centuries of negative history behind that word and the cuss out (or beatdown) that results from you doing so will be swift and sure. 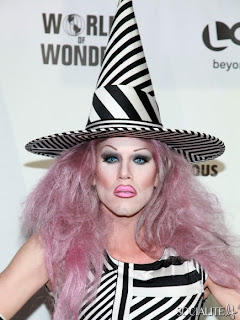 It doesn't help and pisses us off when white BTLG people not only knee-jerk circle the wagons around the people we POC's call out for the offensive bigoted behavior, but arrogantly try to tell us trans and SGL folks of color what we should and should not be offended by.

Non white LGBT people are aware that we can't eradicate racism in our rainbow ranks unless we can have a serious conversation about it and the will to do so.

We also know much of the heavy lifting on this issue has to be done by white GLBT peeps since they still are reluctant to come to grips with the fact or play the 'if we ignore it it'll go away' game there is a rainbow community race problem.

And Sharon Needles, you definitely need to check yourself before you end up walking in your idol RuPaul's and Chuck Knipp's pumps and find yourself becoming a community pariah and your shows being consistently protested