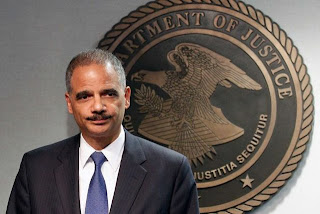 The Fast and Furious conservascandal contempt vote took place on the conservafool controlled House Thursday afternoon after more than 100 Democrats walked out in protest.


“Today’s vote is the regrettable culmination of what became a misguided – and politically motivated – investigation during an election year.   By advancing it over the past year and a half, Congressman Issa and others have focused on politics over public safety.   Instead of trying to correct the problems that led to a series of flawed law enforcement operations, and instead of helping us find ways to better protect the brave law enforcement officers, like Agent Brian Terry, who keep us safe – they have led us to this unnecessary and unwarranted outcome.
“During this time, the men and women of the Department of Justice – and I – have remained focused on what should and must be our government’s top priority: protecting the American people.
“When concerns about Operation Fast and Furious first came to light, I took action – and ordered an independent investigation into what happened.   We learned that the flawed tactics used in this operation began in the previous administration – but I made sure that they ended under this one.   I also made sure that agents and prosecutors around the country knew that such tactics must never be used again.   I put in place new policies, new safeguards, and new leadership to make certain of this – and took extraordinary steps to facilitate robust congressional oversight.   Let me be very clear – that was my response to Operation Fast and Furious.   Any suggestion to the contrary simply ignores the facts.
“I had hoped that Congressional leaders would be good-faith partners in this work.   Some have.   Others, however, have devoted their time and attention to making reckless charges – unsupported by fact – and to advancing truly absurd conspiracy theories.   Unfortunately, these same members of Congress were nowhere to be found when the Justice Department and others invited them to help look for real solutions to the terrible problem of violence on both sides of our Southwest Border.   That’s tragic, and it’s irresponsible.  The problem of drugs and weapons trafficking across this border is a real and significant public safety threat – and it deserves the attention of every leader in Washington.
“In the face of these and other challenges, the Justice Department has continued to move forward in fulfilling its critical law enforcement responsibilities. Whether it is with regard to prosecuting financial and health care fraud, achieving a record mortgage settlement, taking aggressive action in protecting the most vulnerable among us, or challenging proposed voting changes and redistricting maps that could disenfranchise millions of voters – this Department of Justice has not been afraid to act.
“Some of these enforcement decisions were not politically popular and help to explain the action taken today by the House.   As Attorney General, I do not look to do that which is politically expedient – on behalf of the American people whom I am privileged to serve, I seek justice.
“In recent weeks, the Justice Department secured its seventh conviction in the most serious terrorist plot our nation has faced since 9/11.   And just two days ago, the Department awarded more than $100 million in grants to save or create law enforcement jobs, including more than 600 jobs for recent veterans.
“This is the kind of work that leaders in Washington should be striving together to advance.   At a time when so many Americans are in need of our help, I refuse to be deterred from it.   And I will not let election-year politics and gamesmanship stand in the way of continued progress.
“Today’s vote may make for good political theater in the minds of some, but it is – at base – both a crass effort and a grave disservice to the American people.   They expect – and deserve – far better.
“As a result of the action taken today by the House, an unnecessary court conflict will ensue.   My efforts to resolve this matter short of such a battle were rebuffed by Congressman Issa and his supporters.  It’s clear that they were not interested in bringing an end to this dispute or obtaining the information they claimed to seek.  Ultimately, their goal was the vote that – with the help of special interests – they now have engineered.
“Whatever the path that this matter will now follow, it will not distract me or the men and women of the Department of Justice from the important tasks that are our responsibility.   A great deal of work for the American people remains to be done – I’m getting back to it.   I suggest that those who orchestrated today’s vote do the same."