Naw China, We Haven't Forgotten What Today Is 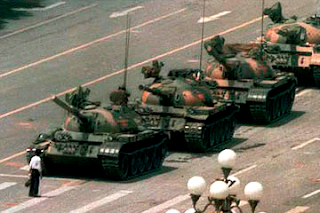 Student demonstrators calling for government reform and an end to corruption in their government occupied Tiananmen Square in the heart of Beijing for five weeks in the spring of 1989.

Those simple demands and the demonstrations backing them up captured the world's attention, but unfortunately between the late evening of June 3 and the early morning hours of June 4, the plug was pulled on the international foreign networks such as CNN broadcasting the event and PLA soldiers backed by tanks subsequently opened fire on civilians in and around the square with casualties estimated between 200-1000 dead.


It's also a reminder to us that democracy requires eternal vigilance. Because once you lose freedoms, it's hard as Hades to get them back.

Frankly, the Republicans and the conservafool moment are staging an all out assault on our basic freedoms while wrapping themselves in the flag, hiding behind the Bible and pimping vanillacentric racial resentment, hatred of GLBT people and fear.  People in the USA need to wake the frack up about it and push back against these domestic enemies to our Constitution.

Keep that in mind people when November 6 rolls around.

Those PLA tanks and troops may have crushed the demonstration, and you continue to try to erase what happened and deny it, but you can't crush the root of freedom from which democracy will inevitably flower  once it has taken root.
.
Naw China, we haven't forgotten what today is and neither have the people who experienced it and live to tell the story.  The world hasn't forgotten those Chinese citizens who died simply because they wanted to make their country a better place to live and their government more accountable to them.