The Roberts Test For Trans POC In Media

I read an interesting post over at Womanist Musings in which she revised the Bechdel Test for disabled people .   It was built off of a post Tami Winfrey Harris wrote for Clutch magazine that created a Winfrey-Harris Test for POC's.

What's the Bechdel Test you ask?   It originated in 1985 from Allison Bechdel’s comic strip “Dykes to Watch Out For” and is based on three simple questions:.


Tami expanded the Bechdel Test in her Clutch magazine post to include the following four questions to ask in terms of POC representation in media created by her and several bloggers of color that included a certain Timmy's Ice Capp loving Canadian.

1. One or more named people of color
2.  Who talk to each other
3.  Who don't act in a service capacity (No magical brown people!)
4.  Who are reflective of their culture and history, but don't communicate that through stereotyped action, such as an affected accent. 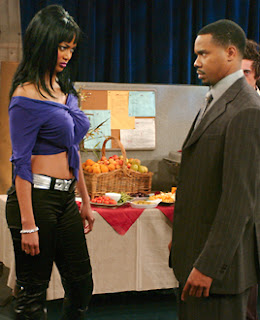 Since the representations of transpeople in media are just as fouled up and especially for transpeople of color, introducing the Roberts Test For Trans POC's In Media to set up minimum standards for positive portrayals of us in these films, plays and television shows.


1.  Are there one or more named trans people of color
2.  Who talk to each other
3.  Who aren't shown putting on makeup
4.  Who aren't killed off in the first five minutes of the show
5.  Aren't played by male actors in drag
6.  Aren't the butt of a demeaning joke
7.  Who aren't sex workers or drag queens
8.  Who are accurately portraying the complexity of trans lives and reflective of their culture and history
9.   Don't communicate that through stereotyped or exaggerated actions such as speaking in drag queen English.


If there are other rules for trans POC's in media you think should be there, leave them in the comment section.
Posted by Monica Roberts at 12:00 AM