The UEFA Euro 2012 tournament is being co-hosted by the nations of Poland and Ukraine June 8 through July 1.   The group play stage is winding down to its conclusion this weekend to determine the teams that will enter the knockout rounds and be in contention for the European championship.

Because it is an international game, talented players of African descent have long been integral parts of European club teams and several national clubs for years.

In the UEFA Euro 2012 tournament the national sides of England, the Netherlands and France have large visible contingents of African descended players.  Italy has 21 year old striker Mario Balotelli and the Czech Republic has Theodor Gebre Selassie as lone African descended starting players on their national teams. 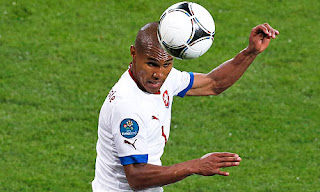 While soccer is called 'the beautiful game', one of the ugly stains it struggles with is racism in the sport, especially in European football venues.  There has been a long deplorable history of players and supporters of European based club and national teams uttering racial monkey chants, anti-Semitic epithets and throwing bananas on the pitch at African descended players.


FIFA has been engaged in a ongoing Say No To Racism campaign to clean up the bigoted behavior in the sport since 2001 which I believe also needs to be expanded to combat homophobia and transphobia as well. . 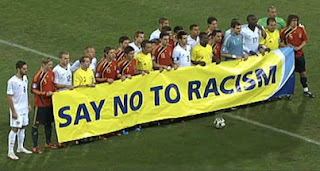 Superstar players in the sport such as David Beckham have also been outspoken about eliminating racism in 'the beautiful game' as well.

UEFA (Union of European Football Associations, the governing body for soccer in Europe) has a zero tolerance policy and rules that make national football associations responsible for their fans' boorish behavior.   Punishments can range from warnings and a sliding scale of fines to points deductions and even expulsion from future Euro tournaments.

Reports out of the first week of Euro 2012 are justifying the concerns that FARE and other groups had when the tournament was initially awarded to Poland and Ukraine.  It seems that old bigoted habits are dying hard.

Even before the tournament started, The Netherlands national squad was highly pissed off about their players being subjected to racist chants during an open training session in Krakow a day after they visited the nearby Auschwitz concentration camp. 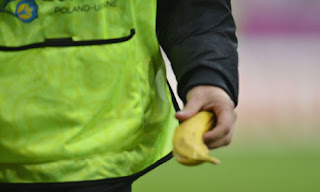 Reports have surfaced that during the June 10 Spain-Italy and June 14 Croatia-Italy matches elements of the Spanish and Croatian fan bases started monkey chants aimed at Balotelli.  The Croatians took it a step further by not only doing the chants but throwing a banana onto the pitch.

Croatia has a particularly egregious history of racist abuse.  They were fined by UEFA for deploying neo-Nazi flags and shouting racist chants during a Euro 2008 quarterfinal loss to Turkey and fined by FIFA for an incident in a World Cup qualifying match in Zagreb in which England's Emile Heskey was subjected to racist taunts.

Croatia has been formally charged for the incidents in Thursday's Croatia-Italy match in Poznan and the Croatian Football Federation is rapidly distancing themselves from the bigoted elements of their supporter base. 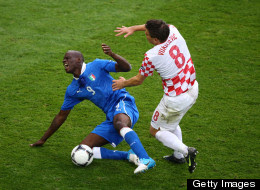 During the June 8 Russia-Czech Republic match in Wroclaw reports are surfacing that some of Russia's nekulturny supporters aimed racist monkey chanting at Gebre Selassie, and UEFA is investigating those charges with Russia's sports minister vehemently denying them.

If those reports are true, then it's karmic justice that the Czech Republic qualified for the knockout round despite being beaten 4-1 by Russia thanks to Greece beating the Russians.1-0 in group play.

Now that UEFA is starting to crack down, we'll see if this chills out the racist supporters of some of the national teams still left in the Euro 2012 tournament and if the threat of severe UEFA sanctions or banishment from Euro 2016 will be enough to get those fans to say no to racism at this tournament.