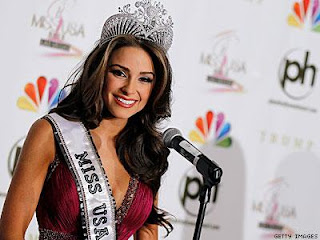 Was focused on watching other things besides the Miss USA 2012 pageant Sunday night but was happy to hear about what the new Miss USA Olivia Culpo from Rhode Island had to say during her five finalist Q&A.

The question she was asked was: would it be fair for a person born a man to be named Miss Universe after becoming a woman?

Y'all know what the TransGriot and a majority of the transfeminine community's answer to that question would be, but we weren't on the stage standing in Ms Culpo's pumps competing for a shot at the Miss USA Universe title

And she proved (so far) she isn't Carrie Prejean or a radfem.

"I do think it would be fair..." because "there are so many people who have a need to change for a happier life. I do accept that because I believe it's a free country."

Time will tell how much of an ally she is to our community, but she definitely is well on the way to making a lot of trans female friends.   The opening of the Miss Universe system starting in 2013 to transwomen is still a contentious subject as cis women have come down on both sides of the issue.

But thanks to Miss USA 2012 for standing up for fairness.