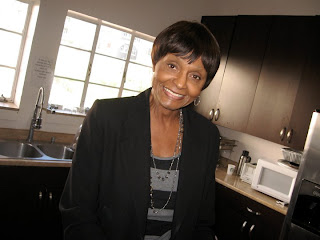 Haven't done a TransGriot Ten Questions interview in a while.  In this one I have the honor and pleasure of interviewing another of our iconic transwomen in Tracie Jada O'Brien.

It's time for her to answer the TransGriot's Ten Questions..

1. You're another person that has seen a lot of our community history in terms of watching the rise of the trans community.  What was it like 'back in the day' and being a part of that?


TJO-We were chased a lot by people in the neighborhood and sexually objectified at the same time. It was quite scary, yet exciting ( 14 years old until I left St. Louis in 1970)
San Francisco in the 70's was an excitingly dangerous place, so free and open.
As a teen I imagined myself in college as my female self (hair in a larger afro and wearing a maxi-skirt) but my reality showed me a different landscape.
I went to San Francisco and began my transition, began experimenting with drugs, and sex work (all the activities was what I saw my peers doing )
I also had the opportunity to go to school but I lacked the drive and confidence at that time .
San Francisco was pretty liberal when it came to living free and open but on the other hand if you were a " working girl or hung out at bars and discos , you ran the risk of being arrested for Female Impersonation.
I saw Trans women excelling in school and work as well as "party girls" . Drugs were definitely present and done freely .

2. When did you transition and what are the differences you've observed between how it was done then and now?
TJO-I began my mental transition early on in my life knowing something was amiss but not know sure what it was . I discovered the Christine Jorgenson autobiography at the library.  I stole it and kept it under my bed.
In my teen years I began experimenting with mascara and wearing very unisex clothes as it was the 60's and bright colors and bell bottoms were in style. It was also during this time that I discover the "gay scene" in St. Louis and drag queens. I had friends that expressed themselves in a very feminine manner . As we all began to express our feminine selves it became very clear (and at times violent) that if I were to continue this journey (whatever it was to be) that I would have to leave St. Louis.
I went to San Francisco in 1970 and met others young folks like myself (mind you during this time there really wasn't a term or name for what I was about to do except for Transsexual or Queen ) and began taking hormones. I went to the "Center for Special Problem " ( YES , the real name of this clinic) on Van Ness Avenue, met with a doctor and was prescribed hormones and given a letter that I took to the DMV where I changed the name and gender on my California ID, to this day ,this is the only " name change" procedure that I have completed. (works for me)
That was the beginning of my transition as I can and only will speak from my own experience
I do know that in the late 60's Harry Benjamin wrote a "standard of care" for treatment of this "issue"
It seemed more simplistic then, however today it appears a more structured precise set of steps that may vary from person or group of person

3. I believe that it is important for transpeople, and especially transpeople of color to know our history and who our history makers are. Do you think we POC transpeople would be in better situations if we youngsters had gotten the opportunity to get to know the stories of you pioneering transwomen?
TJO-Well, the history as I saw it (when I came out in the 60's ) was invisible especially given the "standards of care" and the "stealth" nature of POC trans people
I do belove my generation gave birth to leaders that just had had enough. I did not know of a Marsha P. Johnson and Sylvia Rivera or a Stonewall ( Stonewall 1969) even though that was the year I graduated from High School and formally began my personal journey with a suicide attempt.
Maybe had I known of others that were "fighting" for our existence, things would not have been so emotionally challenging for me ( I must say , I don't regret any of my past as those experiences give birth to the "fighter" in me .) and I would have made more healthier choices and reached my journey of confidence, self acceptance and self love sooner than I did
I definitely believe that if the experiences of Trans POC of the 60s, 70s, 80, and 90's had been documented correctly "youngsters" would have a platform and a base of reference to give credibility to their existence.

5. You're queen of the universe with the power to grant one wish for the trans community. What would it be?
TJO-My dear, I AM the Queen of the Universe! (kidding)
If I were Queen, my wish for my community would be that Transgender would be defined n the following manner : Male , Female, Transgender (mtf), and Transgender (ftm)....instead of GLBT.....I still feel deep in my heart that WHOEVER made the decision to add us to the ladder made a GRAVE error that has and will continue to do a disservice to us.
6. You're based in California with two other iconic African American transwomen, Miss Major and Sharyn Grayson. Do you ladies ever get together to talk shop or about the state of our community?

TJO-I speak with Miss Major very often as she is my sista-friend, mentor, and confidant. She is responsible for me making decisions that changed my life in 1995.
She convinced me that I would be okay and safe if I went to City College.  I did, I excelled and now I pass it on the others that may have fear of the unknown. Facing fears and over coming obstacles and barriers and coming out unscathed "
She and I often speak of the forgotten TG women of color, the most visible and most underserved and unfairly targeted for sexual objectification and violence

7. What advice do you have for young transpeople who are just beginning their transitions?
TJO-You can look at others as role models and might want to pattern your  transition after them  But you can only be the BEST YOU that you can be.
You have a beautiful canvas that is YOU.  Refine and perfect YOU. Only when you are the BEST YOU you can be, you will be able to reach YOUR full potential.
8. What is the one thing that people don't know about you that you feel comfortable revealing to my TransGriot readers?
TJO- I am actually still that scared little child yearning for my mother's love.

9. What are some of the current projects, either personal or activism related that you are pursuing at this time?

10. Where do you see the African American trans community ten years from now?

TJO-We're such a diverse and very often (forced) stealth community. As a  whole I just wish everyone could feel that they are whole humans beings wonderfully and powerfully made. With this perhaps we as community could aspire to greatness.
Posted by Monica Roberts at 12:00 PM