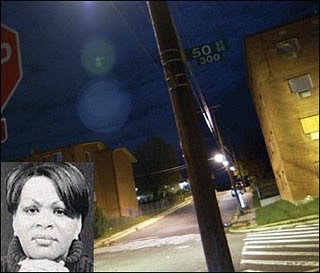 It's the 15th anniversary of the death of Tyra Hunter on August 7, 1995 at the hands of Washington DC transphobes.

Transphobes who sadly held the titles of doctor, nurse and emergency medical technician.

While her mother Margie Hunter eventually won a multimillion dollar settlement for EMT Adrian Williams' reprehensible actions at the corner of 50th and C Streets in Southeast DC, I'd wager she'd be willing to give up every penny to have her child back.

Unfortunately the lack of medical treatment and medical transphobia that prematurely ended Tyra's life is still being experienced by transpeople 15 years later.

A protest sadly will be taking place in front of Ball Memorial Hospital in Muncie, IN on August 17 to detail another instance of medical personnel behaving badly.

Transpeople continue to be disrespected and refused needed treatment by transphobic people in the medical profession. That lack of compassionate treatment and disrespect can have serious consequences not only for our health, but for people's lives.

People in the medical profession need to have the message driven home to them that your faith based hatred of transpeople does not override your responsibilities to expeditiously do your job in an emergency situation, and do no harm to that trans patient.

If it takes them losing some money out of their wallets and purses or pickets in front of medical facilities that disrespect us to drive that message home, then so be it.

Medical transphobia has the potential to kill people, and we owe it to Tyra Hunter's memory to make sure the medical profession and society at large hears that message.
Posted by Monica Roberts at 12:01 AM