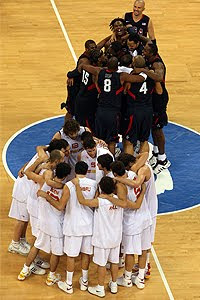 Team USA's Eurotour continues with a 2 PM CDT game versus the defending FIBA World Champions Spain in front of what is sure to be a raucous crowd in Madrid.

The last time we faced FIBA number 3 ranked Spain was during the 118-107 gold medal game in Beijing that has been considered the greatest international b-ball game ever played. Unfortunately for Team USA all 12 participants in that game are sitting at home watching the 2010 FIBA world championship action.

While Spain will be missing Pau Gasol, brother Marc will still be in the Magic Box along with Jose Calderon, Rudy Fernandez, Ricky Rubio and Juan Carlos Navarro.

In addition to being the defending FIBA world champs, Spain won the 2009 EuroBasket title, and picked up silvers in the 2008 Olympics and in the 2007 EuroBasket finals after a narrow loss to Russia. 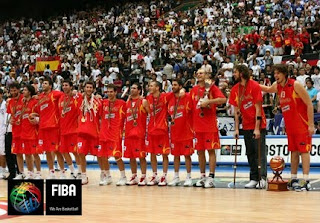 So yes, Spain will be a formidable challenge for Team USA. Can they handle it? Only if they cut out the maddening first quarter slow starts. Shooting 14% and turning the ball over six times in the first quarter will eventually catch up with you.

And Spain has much better guards than Lithuania does. Fall asleep on those Spanish guards and you will be getting your butt kicked.

But I'm sure Coach K and his staff have already made that point clear to the Team USA ballers.

At any rate, should be a fun game to watch.
Posted by Monica Roberts at 4:00 AM