This weekend in New York Team USA Head Coach Mike Krzyzewski and his staff will have to determine which three guys will not be going to Turkey out of the 15 finalists for the squad. The 12 man rosters for the two week FIBA tournament must be finalized by August 24.

For you LeBron haters, he, D-Wade and Chris Bosh aren't on the list. Neither is Kobe Bryant for you folks who love hatin' on him.

Note to the rest of the FIBA basketball planet, don't get too happy because our 'A' team isn't going to be in Turkey. Some of the finalists on this squad are Rajon Rondo, Chauncey Billups, Kevin Durant, Derrick Rose, Tyson Chandler, Lamar Odom and Andre Igoudala just to name a few.

They'll be just as determined to not only win gold in this FIBA world championship for the first time since 1994, but get that automatic qualifying spot for the 2012 Olympic B-ball tournament that goes with it. 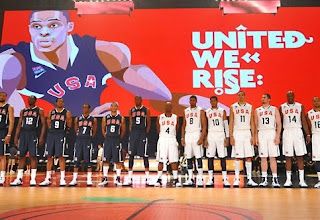 As part of a World Basketball Festival that started yesterday at Radio City Music Hall with an intersquad scrimmage on the Radio City stage, Team USA will be taking on a French National Team at Madison Square Garden August 15 that doesn't include Tony Parker or Joakim Noah.

Noah is on the 24 man French roster and has made it clear while he won't be playing in the FIBA Championships, he will play for France in the future. The Puerto Rica squad will be taking on China in the other game.

But back to Team USA and Coach K and his coaching staff's dilemma. It will be interesting to see who makes this team, then watch them take on the world in Turkey in two weeks.
Posted by Monica Roberts at 6:00 AM