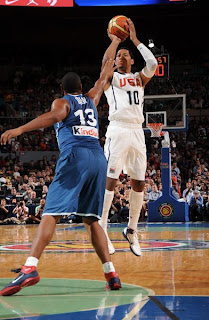 The Team USA men continued tuning up for the FIBA World Basketball Championships in Turkey by playing an exhibition matchup in Madison Square Garden versus France.

Granted, the French team was missing Tony Parker, Joakim Noah and Knick signee Ronny Turiaf, but the Team USA squad that opposed them in front of the sellout New York crowd is missing all 12 members of the 2008 'Redeem Team' that won Beijing B-ball gold.

Chauncey Billups is one of the few players on this young squad with international experience. He played on the 2007 FIBA Americas championship squad that secured the 2008 Olympic berth. It's a young, athletic squad Coach K has to work with that has five 21 year olds on the roster, and that roster got pared down to 13 players after Jeff Green and JaVale McGee were cut yesterday.

But back to Le Beatdown. The game didn't start out that way. This was the first international game for many of Team USA's players and the nervousness showed with the lackluster 6 for 16 shooting and five first quarter turnovers. 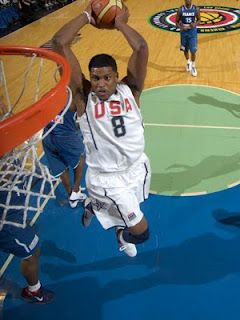 France actually held a 15-11 lead late in the first quarter until the USA turned up the defensive pressure and got a Rudy Gay dunk after a Stephen Curry steal. After France went 1 for 2 from the free throw line, Rudy Gay nailed a three pointer to end the quarter tied at 16 all.

The second quarter saw Team USA sprint off with an 11-3 run to grab the lead for good. France fought back with a 7-2 run of their own to close that deficit to 29-26with four minutes left, but Team USA responded by closing out the quarter with a 10-4 run to take a 39-30 lead into halftime.

The old man of the USA squad, 33 year old Chauncey Billups blew the game open by triggering a run with a pair of three pointers to expand that halftime cushion to 49-34. They kept piling on the defensive pressure and built the lead by the end of the third quarter to a comfortable 61-46 margin. They outscored France 22-9 in the fourth quarter to close out the win.

Team USA's FIBA competition gets tougher as they depart today for Spain. They'll take on Lithuania August 21 and the FIBA defending men's champion Spain on August 22 in Madrid before traveling to Athens to take on Greece, the team that eliminated them in the 2006 FIBA semis.

The final cut will be taking place sometime during or after during the European tuneup tour and we'll see starting August 28 whether this team has the right stuff to win our first FIBA men's title since 1994.
Posted by Monica Roberts at 4:00 AM